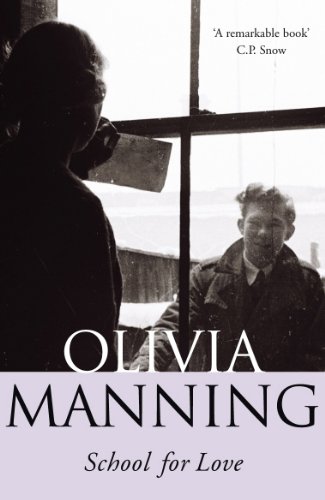 I really like Olivia Manning‘s writing. Her husband was a British Council lecturer in Bucharest when World War 2 broke out and her experiences at that time led her to write a series of books which were heavily influenced by their experiences there. She and her husband evacuated to Egypt as the Germans advanced and her husband eventually ended up in charge of the Palestine Broadcasting Station.They didn’t return to England until 1946.

School for Love was published in 1951 and is set towards the end of the war in Jerusalem. Felix Latimer, a teenage boy has travelled there to lodge with Miss Bohun after the death of both of his parents. His only relative is an uncle in England, unfortunately he can’t travel there because all of the ships are being used to carry troops. Jerusalem is jam packed with people in the same situation, just waiting for the end of the war when they can escape the place.

Miss Bohun who had a very distant connection to Felix’s father’s family turns out to be one of those religious tract distributing females. She’s the leader of a Christian sect called the Ever-Readies, who are in Jerusalem awaiting Jesus’s imminent second coming. This has similarities with Stella Gibbons’ Cold Comfort Farm, although not as funny.

The whole book revolves around her personality really and how the other characters have to cope with her. She turns out to be a truly ghastly person. Money grasping, mean and mean spirited, thinking the worst of everyone and all under the guise of being a good Christian woman. I absolutely hated her which I suppose just shows you what a good writer Olivia Manning was, but it almost spoiled my enjoyment of the book.

School for Love isn’t nearly as good as her earlier works, The Levant Trilogy and The Balkan Trilogy but it is still worth reading.

I find it quite worrying that there was probably a character very like Miss Bohun in Palestine at that time as Olivia Manning got a lot of “copy” from her wartime experiences. She definitely lived in interesting times.

Anthony Burgess described Manning as “The most considerable of our women novelists.”