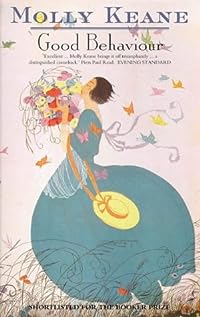 I really enjoyed the previous books which I’ve read by Molly Keane (M.J.Farrell) which were Two Days in Aragon (1941) and Devoted Ladies (1934). Good Behaviour was published very much later, in 1981 and was short listed for the Booker prize.

The book is set in Ireland and the character of Miss Aroon St Charles is so obnoxious in the first few pages that she might put some people off the book altogether but the story takes you back to Aroon’s childhood and development, showing what had contributed to the forming of Aroon’s character.

The St Charles family is an Anglo-Irish one, of landed gentry living at Temple Alice in much reduced circumstances but unwilling to change their habits. They expect the local tradesmen to support them in their lifestyle with no thought of ever paying any bills sent out to them and convinced that people are trying to rob them when they just want to be paid.

Of course at the same time they are looking down their noses at everyone, confident that they are superior to them all. Being a female and a rather large one at that, Aroon has a bad time of it with her mother constantly denigrating her.

It says a lot for Molly Keane that she managed to write an enjoyable book even although there are hardly any likeable characters in it. The mother is a very recognisable type to me, maybe it’s a Celtic trait in mother/daughter relationships, where girls just have no value in the family at all, except as unpaid servants. I hope it has changed for the better nowadays.

The local ‘nobs’ neglecting to pay their bills also rang true as I know that the ‘high class’ grocers in my home town went bankrupt in the 1970s because the customers who regarded themselves as better than the rest of us refused to settle their accounts, literally for years.

Anyway, I did end up enjoying Good Behaviour and at 245 pages it was a very quick read.