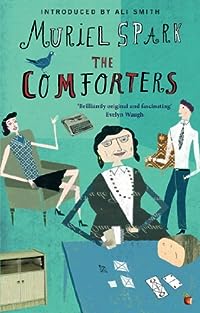 The Comforters was the first of Muriel Spark’s twenty-two novels to be published. It was published in 1957 and as I’ve just recently finished reading Lanark, Alasdair Gray’s first novel I have to say that I did notice similarities between the two, they’re both a bit crazy, written by Scots, influenced by Calvinism and are about writing and characters, with books within books. The Book of Job also features in both books.

At the beginning Laurence Manders is on holiday, staying with his grandmother Louisa, and on waking his first morning there he overhears her asking at the baker’s van for a wholemeal loaf, claiming that Laurence won’t eat white bread, which isn’t true. Laurence works for the BBC, isn’t sure if he is still engaged to Caroline Rose and his main hobby seems to be snooping into everyone’s business, even reading their letters. When he finds a cache of diamonds in the centre of the wholemeal loaf he thinks that his grandmother must be part of a diamond smuggling gang.

Caroline Rose, his sometime fiancee has converted to Catholicism, whilst Laurence is a lapsed Catholic. Caroline has taken herself off to a Catholic retreat as she is having some sort of nervous breakdown and hears a typewriter which seems to be narrating her thoughts.

Throw in a handful of unusual characters, including one Georgina Hogg, a ghastly self-righteous and poisonous pain who was almost certainly a nod to James Hogg’s book The Private Memoirs and Confessions of a Justified Sinner, and it all adds up to a strange but enjoyable read, although it isn’t one of my favourites by Spark.

This book was written as Spark was converting to Roman Catholicism and she was very poor and undernourished. Whilst writing the book Spark took Dexedrine which was apparently used as an appetite suppressant in the 1950s but resulted in her having hallucinations, like the Typing Ghost in this book, she didn’t realise that it was the drugs which were to blame for the hallucinations and she continued to take them for 3 or 4 months. Well, they led to this book I suppose and she certainly wasn’t the first writer to have her imagination boosted by drugs. Just think of Lewis Carroll!

I read this as part of the Read Scotland 2014 Challenge.