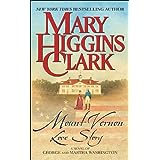 Mount Vernon Love Story by Mary Higgins Clark was first published in 1968 and it was the first book which Mary Higgins Clark wrote. She has since written a lot of crime novels but I haven’t read any of them so far. This was one of the many books which Peggy Ann brought for me from the US when she came to visit us last year.

As it says on the cover, this is a novel of George and Martha Washington. I knew nothing about Washington, beyond that he had made a wonderful estate called Mount Vernon which I would definitely go to visit – if we had that ‘beam me up Scottie’ gadget – but we don’t – so I won’t.

I have no idea how much is actually known about Washington and his private life, but I did think that this book wasn’t all that well written, I’m sure the author must have improved her writing skills since this one was published. I think maybe it was a lack of hard facts and imagination which led the author to say at one point that Washington appreciated that his wife always kept the house so clean and the furniture so well polished. I found that a bit bizarre, given the fact that it was a large household of slaves who did the housework!

I also found it hilarious that at meetings such as Continental Congresses he was very careful to put on a uniform, in fact being the only one there in uniform. I think despite that we were supposed to believe that Washington wasn’t personally ambitious, but of course – he was.

I was left wondering why Washington had such a bad relationship with his mother, and why he seemed only to be interested in women who were already married to his friends. A psychologist would have had a field day!