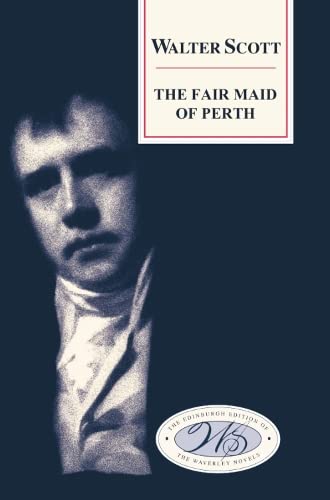 The Fair Maid of Perth or Saint Valentine’s Day as it was originally titled by Sir Walter Scott was first published in 1828 and I believe it was originally in three volumes, but they’re all incorporated in one book in The Edinburgh Edition of the Waverley Novels. I must say that these editions are really excellent as they have so many interesting explanatory notes, a glossary, an emendation list and all sorts. Scott seems to have felt that people might be losing their appetite for chivalric swashbuckling tales, but he was persuaded to carry on although there is an unusual ending – in my opinion. I must admit that the first volume of this book I ploughed through with not much enjoyment, I wasn’t too concerned by that as it usually takes me a while to get into the rhythm of Scott’s very wordy writing style. The further I got into the book – the more I enjoyed it.

The setting is mainly Perth and Falkland so just a stone’s throw from where I live, great for me as I could ‘see’ it all clearly in my mind. It’s 1496 and Catherine is such a beauty she’s nicknamed The Fair Maid of Perth. During a drunken escapade King Robert III’s eldest son Rothsay and his entourage try to abduct Catherine. She’s the daughter of a well-off glover and he is keen for his daughter to marry Henry Smith who is a very successful armourer. He’s also well known for being good at fighting and it’s that that puts Catherine off him. She isn’t into alpha males at all, doesn’t like violence and she already has feelings for a young man who had been her father’s apprentice in the past.

In this book Scott shows that he wants to move on from the days when clan warfare could result in some clans being more or less wiped out completely and looks forward to a more civilised society in the future – I think.

I read The Fair Maid of Perth for The Classics Club.