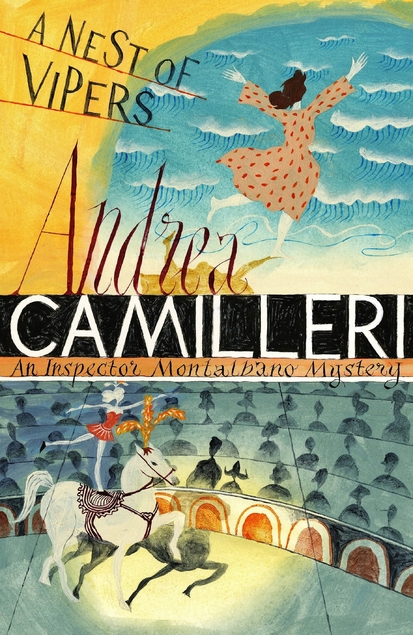 A Nest of Vipers by Andrea Camilleri was published in 2013 but the translation copyright is 2017 and it was translated by Stephen Sartarelli.

I had already seen this one on television, I really enjoy the Montalbano series – as much for the locations in Sicily as for the crime solving and characters, but I must admit that I was a wee bit disappointed with this one. I had actually seen it ages ago on TV but either I misremembered the outcome, or they changed it for TV which I think is possible as the ending I remembered is better.

Anyway, I’ve only read one of these Montalbano books before and I don’t recall noticing that it was about 95% dialogue, which is all very well – and makes for a quick read, but there’s very little in the way of description of the area, no real sense of the locations.

An elderly widower is found dead in his dining-room by his son, but it seems he has been poisoned and also shot in the head – overkill, so to speak!

It transpires that the victim led far from a blameless life and there were plenty of people who would have liked to see him dead, in fact about half of the town of Vigata. Montalbno gets to the bottom of it of course with the help of Fazio and Augella.

There’s a lot of semi-comedy especially with Montalbano’s girlfriend Livia turning up for a visit. They bicker from the first second, even on the phone, but it’s Italy so they’re supposedly in love. I hadn’t realised before that she is useless at cooking and not much better at housekeeping, and crucially Livia and Montalbano’s domestic help Adelina hate the sight of each other so Montalbano has to forego his usual delicious meals cooked by Adelina while Livia is there and he has to dodge Livia’s terrible attempts at cooking.

This is mildly amusing but I will only give it a three on Goodreads.

I read this one for the 2019 European Reading Challenge which is being hosted by Gilion at Rose City Reader.