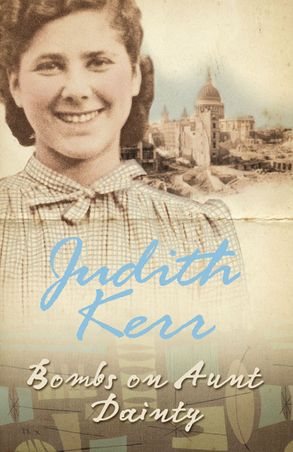 I enjoyed reading Judith Kerr’s When Hitler Stole Pink Rabbit so much that I decided to read the sequel as soon as I could get it from the library. In Bombs on Aunt Dainty, Anna (Judith) is now a teenager and living in London with her parents and older brother Max. The city is full of refugees who have escaped from the Nazis and you can imagine their depression as they all gathered around radios listening to the news of the German army swarming through country after country and seemingly only kept at bay from England by that very narrow channel. A lot of the ‘enemy alien’ men were taken away and interned on the Isle of Man and as Max discovered, even the people of German extraction who had gone to school in England were deemed to be possible dangers to the security of the country, despite them being some of the first victims of the Nazis.

This is another lovely read with Anna growing up and discovering her talent for drawing, and infatuation with her drawing teacher. As soon as Anna and her brother Max got to England they seemed to feel that they had reached home. They didn’t feel like that about Switzerland or France where they had lived for quite some time, until they didn’t feel safe there any more. They both assimilated so well that people didn’t even realise they were German, but their parents struggled with the poverty that they had never been used to and the complete change in their circumstances. Even when the Nazi bombs began to blitz London they stayed put until they were completely bombed out and a lack of money was a constant worry.

All through the book it’s obvious that the English were admired greatly. I can’t help wondering what happened to the traits that engendered such admiration, they’re not at all in evidence nowadays.

I was annoyed by the constant use of the word England when what the author meant was Britain and even worse was that the many allied forces didn’t get a mention at all, as if it was only England who fought against the Nazis when of course it was also fought by New Zealand, Australia, Canada, South Africa, India, Russia and of course eventually the USA. However using England when they meant Britain was a habit that people of a certain generation got into.

If you like a wartime setting you’ll enjoy this one. Now I’ll have to track down the next book – A Small Person Far Away in which Anna apparently goes back to Berlin after the war. I imagine it wasn’t for long though.

1 thought on “Bombs on Aunt Dainty by Judith Kerr”