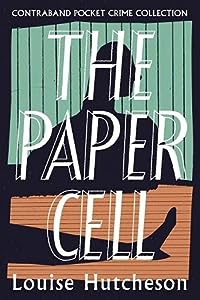 The Paper Cell by Louise Hutcheson was published in 2017 by Saraband/Contraband and I was drawn to it in Waterstone’s in Chester because it’s such an attractive wee hardback, it even has attractive end-papers. I hadn’t ever heard of the author but I bought it as it was in a sale, I’m so glad that I did as it turned out to be a great read. It seems that the author hasn’t written anything else, but I really hope she does. Louise Hutcheson has a PhD in Scottish Literature from The University of Glasgow.

There’s a short prologue which is set in London 1953, but in no time we’re taken to Edinburgh, 1983 where the author Lewis Carson is about to give an interview to a young journalist after years of silence, but Lewis takes ill during the interview, and the action moves back to London 1953.

Back then Lewis Carson had been a lowly publishing assistant, not fitting in at the family business which was headed up by the bullying son of the owner. When a down-at-heel young woman presents him with her manuscript to be appraised he realises that it’s a great read, but sends her away disappointed, however he still has her MS.

When the young woman is murdered a couple of weeks later Lewis takes the opportunity to claim the MS as his own and it kicks off his writing career. But after writing many more books everyone agrees that none of them come up to the standard of his first book. Lewis doesn’t want to talk about that one though, it’s a taboo subject which weighs on his conscience and contributes to the break up of his marriage. Lewis realises that his whole life has been lived in a ‘paper cell’ of his own making. This was a cracking read.