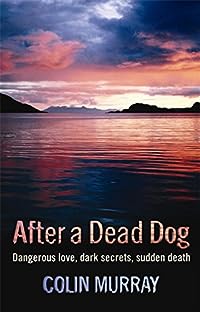 After a Dead Dog by Colin Murray was published in 2007. The setting of this thriller is the west of Scotland.

Iain Lewis is living in the small childhood home that he had inherited from his father. He makes a precarious living writing various things for TV – now and again. His earlier writing career seemed certain to point to a glittering writing career but it hadn’t come to fruition. In some ways he has been living in the past after his romance with Carole, the daughter of the local wealthy businessman (fish processing) had failed soon after her father’s death. Twelve years on from the end of that romance Iain is attending Carole’s mother’s funeral and meeting her husband Duncan for the first time. Duncan makes it clear that he sees Iain as a danger to him and tries his best to get him into trouble with the police.

Irish gangsters seem to have become involved in Carole’s family business and they’re a violent bunch, but Iain holds his own as he had been a boxer in his student days. It isn’t long before firearms feature in attacks against Iain. The bad guys think Iain has their money and drugs and Iain travels to Glasgow to get help from his old friend Dougie who is a well-known crime reporter who knows some of the gangsters involved.

This book is reminiscent of Iain Banks’s writing, which is definitely no bad thing. I really enjoyed this one. Colin Murray had worked in publishing in London as an editor for years before moving to Scotland some years ago.