The Hotel by Elizabeth Bowen is the author’s first book, but it certainly doesn’t read like a first effort. It was first published in 1927 but my edition is from 1950. I really enjoyed this one although not a lot happens, it’s all about the relationships between the various hotel guests.

The setting is a hotel on the Italian Riviera which is frequented by well off English people. It isn’t long after the end of World War 1 so there are far more females around than males in society in general. Friends fall out, one young woman has a rather intense relationship with an older woman. An unmarried vicar arrives and upsets some guests as he inadvertently uses their bathroom, he’s never forgiven but he’s completely oblivious to it. It’s the funniest episode in the book. Some people are completely delusional, would be horrified to know what others think of them. People are ‘dropped’. Those who should know better fall in and out of love at the drop of a hat. There’s nothing at all earth shattering, but it is entertaining.

Elizabeth Bowen wrote far more books than I had realised, you can see her output here.

I do enjoy a hotel setting, I suppose because it gives the writer scope for gathering together odd characters who are out of their usual milieu, and everyone is a bit different from usual when they’re on holiday. I seem to have read a lot of books with hotel settings over the years so I might devote a blogpost to them – sometime.

Crome Yellow by Aldous Huxley was first published in 1921 but it has been reprinted regularly since then, the copy I read was from Fife Libraries’ reserve stock. This is the first book by Huxley that I’ve read and the reason I read it was because it was mentioned in another book that I read, one of the characters was reading the book for the third time. I don’t think I will be doing that but I did enjoy it. It’s a gentle parody of English country house novels.

It begins with a railway journey, always a good thing for me especially when I realise it will be a steam train. Denis is a young man on his way to spend some time at Crome a country house he has been invited to as part of a house party. He’s a more or less penniless poet and he’s planning to write a novel. Other guests are a well known portrait painter and a couple of bright young things in the shape of young women, one of whom Denis is enamoured of. The changing times due to World War 1 are in evidence with the young women determined to get rid of their repressions and live a more free life.

This is one of those books that you can’t help thinking that you must be missing many of the allusions in it. When it was read by contemporary readers they would have been able to recognise many of the characters I’m sure. One of them – Mr Callamay – is apparently meant to be modelled on the then prime minister Herbert Asquith who must have been in the habit of chasing after pretty young women.

There are some interesting comments during conversations about people who upset the world such as Luther and Napoleon.

“We can’t leave the world any longer to the direction of chance. We can’t allow dangerous maniacs like Luther, mad about dogma, like Napoleon, mad about himself, to go on casually appearing and turning everything upside-down. In the past it didn’t so much matter; but our modern machine is too delicate. A few more knocks like the Great War, another Luther or two, and the whole concern will go to pieces. In future, the men of reason must see that the madness of the world’s maniacs is canalized into proper channels, is made to do useful work, like a mountain torrent driving a dynamo.”

I wonder what on earth Aldous Huxley would have made of the maniacs that we’re having to put up with nowadays! 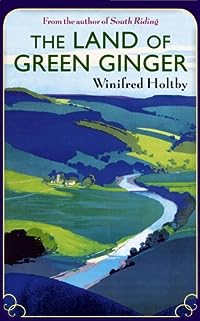 I wanted to read something by O. Douglas, or Anna Buchan as was her real name, and I came across Penny Plain recently in a second-hand book shop. It’s the easiest to find and also the cheapest by far, but I’ve just discovered that I could have downloaded it for free, such is life!

Anna Buchan was John Buchan’s sister but she didn’t write thrillers. I think she would be best described as a romance writer and Penny Plain comes under that category ‘kailyard’ which was so popular in the early years of the 20th century.

It’s set in the Scottish border country in a small town called Priorsford and is the story of Jean Jardine whose parents have died and she has to bring up her two younger brothers and a very small boy who is no blood relation at all, but as he is an orphan she feels obliged to look after him. They all live in a small cottage by the banks of the River Tweed which they rent from a man who lives in London, and Mrs McCosh from Glasgow helps with the housework.

The next-door neighbour, Bella Bathgate, takes in lodgers and Pamela Reston who is an ‘honourable’, a lord’s daughter from London, takes up residence as her guest and becomes great friends with the Jardines, which leads to big changes for all concerned.

There are times when the book gets just a wee bit too religious and Presbyterian, but I suppose that was to be expected from the daughter of a Wee Free minister. The Free Church of Scotland is the strictest form of Presbyterianism, no singing, no music, no dancing, do nothing on a Sunday except go to church and read the bible, don’t even cook a meal!! But then again her brother John never felt the need to bring it into his books.

Having said that the book is full of great characters who all ring true to me as typical Scots, especially Mrs McCosh the Glaswegian and even the dog Peter is a ‘card’. There’s plenty of humour as well as sentimentality.

If you do take a look at this book you might like to know that the wee boy is nicknamed ‘the Mhor’ which is Gaelic for ‘the great one’ and in Gaelic ‘mh’ together is pronounced as a v.