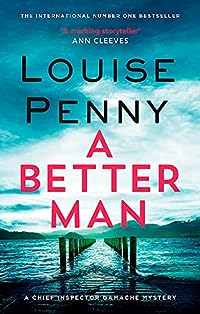 A Better Man by Louise Penny was published in 2019 and it’s a continuation of her Chief Inspector Gamache series, number fifteen.

As expected this was a really good read, a lot of the enjoyment is just being back in Three Pines, that off the map Quebecois village that so many of us want to live in – despite its crime rate! The odd local murder now and again would be worthwhile putting up with if you could have your coffee and pastries at Gabri and Olivier’s bistro, sitting by the fire.

It’s a time of change at the Surete de Quebec, Armande Gamache has been demoted and Jean Guy will soon be moving on with his family to a new job in Paris, meanwhile there’s still work to be done. Vivienne Godin is a 25 year old local woman and her father is worried as she’s missing. To make matters worse she’s also pregnant. Her drunken and abusive husband is under suspicion.

At the same time the police are having to deal with the fast melting snow and ice which is threatening to flood the whole area. The Riviere Bella Bella is in danger of breaking its banks, and the dams are about to burst. If that happens the flooding will stretch into Vermont. All the villagers can do is fill sandbags and watch the river rise.

As ever there’s a lot of angst as Armande has more than his fair share of enemies among politicians in power, but there’s also an awful lot of love around, not only between Armande and his wife Reine-Marie but also among the other villagers and their various animals – not forgetting Ruth the ancient poet (how old is she?) and her beloved companion the duck Rosa. I think they’re both mellowing with age.

If you do read Louise Penny’s books you should make sure that you read her Acknowledgements at the back of the book. They’re always very personal and moving. I think she should copy Elizabeth von Arnim and write a book called All the Dogs of My Life. Mind you given the shortish age span of most dogs it would be a tear-jerker.