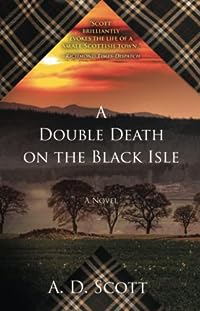 First I want to say a big thank you to Peggy for sending me this book. I’d send her a Hielan’ coo if I could!

This is the second book by A.D. Scott which I’ve read, the first one in this series is called A Small Death in the Great Glen, which I enjoyed but I think I liked this one even more.

Set in the Highlands of Scotland in the 1950s, the main character is Joanne Ross, a typist at the Highland Gazette. She’s now a single mother as she has left her abusive husband and she’s being given more work on the newspaper, learning to become a reporter.

The Highland Gazette has just been given a makeover and the first edition has been well received, now the editor is worried about finding enough news to keep the standard up and interest more readers. But it turns out that there’s plenty going on in the Highlands, I don’t think it’s actually mentioned in the book but the Gazette is obviously based in Inverness and most of the action goes on on the Black Isle where there are two deaths on the same estate, on the same day.

As ever I don’t want to say too much about the storyline but I did enjoy it and the way that Joanne’s character and personality are developing. She’s up against the small minds of a rural community, where women who wear trousers are thought of as scandalous and leaving a husband is just unheard of – but she’s winning the battle. I’m looking forward to reading the next in the series. I read this one for the Read Scotland 2014 Challenge. A.D. Scott is actually a Scot although she doesn’t live there at the moment but I think her nationality comes across clearly, she couldn’t be mistaken for someone who has just chosen to set a novel in Scotland.