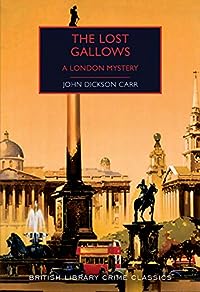 The Lost Gallows by John Dickson Carr has just been reprinted by the British Library but it was first published in 1931. In no way could this book be described as a cosy mystery, it’s the very opposite, so atmospheric and full of creepiness, verging on horror at times, but still a good read even if you lean towards comfy crime usually.

The setting is a very foggy autumnal London, beginning in the notorious Brimstone Club where M. Henri Bencolin and Sir John Landervorne are examining a miniature set of gallows. Sir John had been assistant commissioner of the metropopitan police and Bencolin is the head of the Paris police. The set of gallows had suddenly appeared on the desk of Mr El Moulk, another member of the club, and it has unnerved him more than just a wee bit. The rumour is that Jack Ketch, a famous London hangman of folklore is roaming around London with his gibbet, looking for people to hang.

There’s many a spooky incident, with a limousine apparently being driven by an obviously dead man. With Bencolin making frequent references to the Red Widow, in other words the guillotine, this is very far from the works of the likes of Agatha Christie who steers clear of anything as sordid as the death penalty. To be honest I’m happier with that style of writing. I’m going to be utterly sexist here and possibly entirely wrong but I think that John Dickson Carr’s style might be more popular with male readers. Having said that this is the seventh book by John Dickson Carr that I’ve read and I’ve liked them all, he’s just not a favourite. This is a good read though, especially if you lean towards horror.

I was sent a copy of this book by British Library for review, my thanks to them.