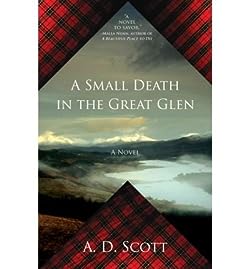 First I have to say a big thank you to Peggy Ann for sending me three books by Scottish ex pat author A.D. Scott for my birthday which was a while back. I thoroughly enjoyed A Small Death in the Great Glen which is set in the Highlands of Scotland in the 1950s.

When the body of a young lad is found in a canal lock it’s thought that he has just stumbled into the canal and drowned, but on examination of the body it’s discovered that he has been ‘tampered’ with and as usually happens suspicion falls on the only stranger in the community, a Pole who had been a crew member on a Russian ship which had been docked in the harbour.

As usual I’m not going to say too much about the plot for fear of spoiling it for other readers, suffice to say that the author has drawn on Scots traditional tales, such as hoodie crows, just as that other writer of Scots descent Edgar Allen Poe did – well a raven anyway.

I suppose it could be said that this is a familiar tale but it’s also a very well written one with some great characters and A.D. Scott has captured the atmosphere of a small Scottish town of the 1950s with all its prejudices and social problems. In fact I found it all to be very similar to my experiences growing up in a West of Scotland small town in the 1970s, things certainly hadn’t moved on much in those 20 years. Like the fact that women who wore trousers were looked on askance, and in fact when I started work in a library in the 1970s the female staff members were not allowed to wear trousers, no matter how smart and expensive they might be.

Italians also feature, just as they did then in Scottish towns, there was always a fish and chip shop which was owned by Italians and the Italian cafes were wonderful exotic places with coffee in glass cups and saucers, ice drinks which now seem to be called ice cream floats and a great selection of continental chocolate. Sadly the second and third generation Italians didn’t want that way of life and Italian cafes are now a thing of the past.

This book brought it all back for me, scary local house and all. Does every neighbourhood have a house which terrifies the local children? One which you had to run past, ducking down while you ran so that your head couldn’t be seen above the hedge.

Anyway, I don’t normally read what other people think of books on Goodreads but I did with this one, just because Peggy Ann is the only person I ‘know’ who is a fan. I was annoyed to read one review which complained about the ‘slang’ which is used in the book. There is no slang but there is dialogue in various different Scots dialects, which is no mean feat actually, all of the words used are fairly easy to guess at from the context. A glossary would have been nice for people who might find the language confusing, but really we all manage to understand dialogue in American movies which can be quite challenging at times, some people seem to think that everyone should speak just as they do though – how boring would that be?!

On a totally personal note I was chuffed when the action moved briefly from the Highlands of Scotland to my beloved Glasgow. I was born there but we moved out of the city when I was 5, I was back there just about every week though, my mother was a keen shopper and city person, so I enjoyed the fictional trip to Glasgow and at one point as Duke Street was mentioned I was holding my breath thinking that the street which I was born in was going to get a mention, but it didn’t, well that would have been just too spooky I suppose.

I’m looking forward to reading the next book in this series – A Double Death on the Black Isle. I don’t think these books are easy to obtain in the UK as they have been published in the US. It’s about time someone published them over here.