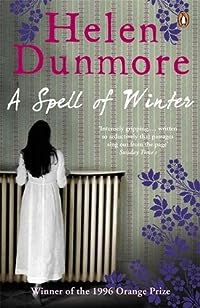 A Spell of Winter by Helen Dunmore won the 1996 Orange Prize and it is a great read if at times a bit shuddersome for any woman with a brother anyway.

Catherine and her brother Rob live in the country in a large dilapidated old house which belongs to their grandfather. Money is scarce now but the family had been wealthy in the past. Their mother has abandoned them and they have no contact with her, their father is in a sanatorium as a long-term patient. Kate and Eileen look after the children with Kate in particular being more like a surrogate mother to Catherine.

Their grandfather keeps them in the dark about both their parents. Why has the mother abandoned her children? There’s a ghastly character called Miss Gallagher who is supposed to be teaching the children but she all but ignores Rob whilst fawning on Catherine who despises her.

Time passes and a wealthy next-door neighbour shows an interest in Catherine and Rob isn’t happy about that at all, which leads him to do something unspeakable.

This book is a bit like Wuthering Heights with a hint of Jane Austen. There’s a lot more to the story than I’ve written about, I like to be quite sketchy about plots.

The Guardian said of Helen Dunmore: An electrifying and original talent, a writer whose style is characterized by a lyrical dreamy intensity.