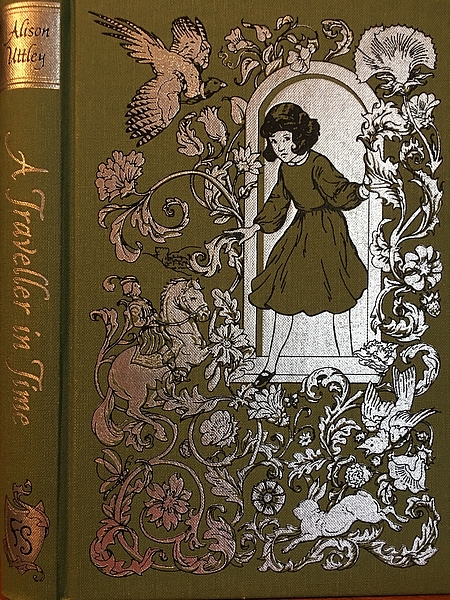 A Traveller in Time by Alison Uttley was first published in 1939. My copy is a lovely Folio edition which is illustrated by Omar Rayyan. It’s yet another children’s classic that I’ve only just got around to reading thanks to Constance who mentioned it on my blogpost about Uttley’s books for very small children. Th eauthor was very much influenced to write this book by her own childhood. She grew up in a house very close to the Babington manor house in the book and her father told her stories of those Elizabethan days as if he had lived them himself, and Alison Uttley visited them in her dreams.

A Traveller in Time is told by Penelope Taberner Cameron as she looks back to her childhood which began in London’s Chelsea where she was the youngest of three children and was regarded as being a bit ‘fey’. Possibly she has the second sight, or maybe she’s just a dreamer, her older siblings are happy to listen to her tales of the past. She’s prone to soar throats and her mother decides that Penelope needs to get out of the atmosphere of London to some fresh air. Aunt Tissie and Uncle Barnabas are contacted and they’re very happy to have all three children for the holidays at their manor house and farm called Thackers.

It isn’t long before Penelope finds herself slipping back in time when least expected and she becomes a much-loved member of the Babington household who are puzzled by her intermitent appearances but always happy to see her. Penelope knows her history so she realises that Anthony Babington, the eldest son of the house is on a path to a terrible end which she is powerless to change. Mary, Queen of Scots has been captive in England for years on the orders of her cousin Queen Elizabeth. Anthony is determined to rescue her and get her to safety in France.

This is a beautifully written book and it is such a shame that she didn’t write more books for older children. There are so many characters to like too so it was a treat to be in their company.

Apparently in 1978 the BBC dramatised the book, I don’t recall ever seeing it though. Do any of you remember it?

If you know the history of Mary, Queen of Scots you’ll be aware that she was moved around a lot over the twenty years that she was imprisoned, and several times she did manage to escape, in fact I’ve lost count of the amount of places I’ve been to that she has also walked around in. She was imprisoned in what was my childhood local castle Dumbarton Castle, and I believe escaped from there. More famously she escaped from Loch Leven Castle which is close to where I live now, you can see my blogpost about that here. Even closer is the hunting palace of the Stuarts Falkland Palace, which is a place that she loved in her younger years.