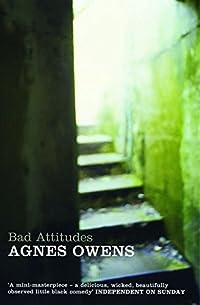 Bad Attitudes by the Scottish writer Agnes Owens is a book containing two novellas. The first is Bad Attitudes, the setting is a grim council estate where the Dawson family have been moved to a new flat after their old home had been ear-marked to be condemned.

I have to say that the writing is really good, Agnes Owens has a great ear for dialogue which makes the story feel very authentic, in fact maybe a wee bit too real as this seemed a really grim read to me, and wasn’t what I wanted to read at this time, in fact maybe never as the setting just doesn’t appeal to me and the characters are the sort of people I would go a long way to avoid.

The second novella is called Jen’s Party. Jen is a young schoolgirl who lives with her mother Maude. Jen has never known her father as her parents got divorced when she was very young and as a result Jen has dreamt up an idea of her father which is far from the reality of the thieving jailbird that he is. Maude is a sad character, lonely and struggling to make ends meet, she allows her more lively sister Belle to move in with them. But Belle is one of those people who ‘say more than their prayers’ – as my mother would have said. In other words, she promises the world but instantly forgets her promises and is only interested in herself. Jen’s Party isn’t quite as grim as Bad Attitudes, it has some humour, but it wasn’t really my cup of tea either.

Ali Smith wrote in the Guardian: ‘A simple parable of harsh hospitalities and home-truths …. Jen’s Party is a beauty of a vignette; genuinely funny, light where ‘Bad Attitudes’ was dark … Owens stuns her readers, as usual with her good, blunt-weaponed clarity.

I’ve just read the Wiki article on Agnes Owens and it seems that she died last year, and she lived just a few miles from where I grew up, but I had never heard of her until this year.

This book was the 25th that I’ve read for the Read Scotland 2015 Challenge, which I think means that I’ve reached the ‘Back o’ Beyond’ As usual I have been rotten at linking my reads onto the Goodreads thingy, or even Peggy Ann’s Post, I hope to do better for the 2016 Challenge.