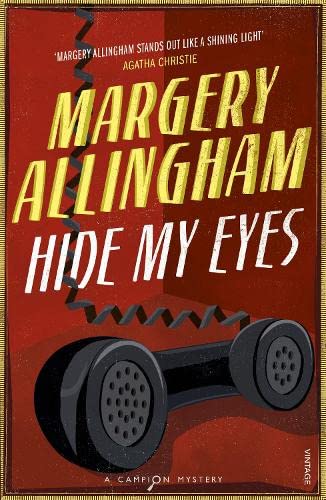 Hide My Eyes by Margery Allingham was first published in 1958 and the title in the US is Tether’s End or Ten Were Missing.

After trudging through this book I’m left wondering – Was it me – or was it the book? For me Allingham’s books can be quite curate’s eggish – in other words good in parts. Everyone seems to really rate this one and I just didn’t like it much at all. It’s supposedly one of her Albert Campion books but he’s even more shadowy than usual in this book. The best I can say of it is that it’s atmospheric of 1950s London.

There’s a serial killer around and Campion has been asked to help out with the investigation.

What annoyed me more than anything was the copious references to the actual serial killer John Haigh who operated during the 1940s as the murderer was copying his methods – hardly innovative! I’m left thinking that Allingham knew she would be likely to be criticised for using the same modus operandi as John Haigh so decided the best thing to do would be completely up front and open about it.

I read two duff books in a row, this one and The Rider of the White Horse – things can only get better – I hope.

Traitor’s Purse by Margery Allingham which is called in the US – The Sabotage Murder Mystery – was first published in 1941. After reading an article in the Guardian recently about the book I decided I had to read it soon, so I resorted to the internet to get it fast, rather than doing my usual patient mooching in secondhand bookshops and trusting to serendipity that it would turn up soon.

Prior to reading the Guardian article I had always read that Allingham’s best book was The Tiger in the Smoke, so I was very surprised when Traitor’s Purse was mentioned as being so good, but I must say that I agree completely, especially as the book cleared up a puzzle for me.

I had always been perplexed by the character of Allingham’s sleuth, Albert Campion. I haven’t been reading her books in order and it seemed obvious to me that the older Campion had matured into a much more interesting human being. To put it bluntly the young Campion always seemed to me to be more than a bit of a wet willie. In Traitor’s Purse Campion has more or less the same opinion of himself as I had.

Campion wakes up in a hospital bed, unable to remember anything, not even his own name. He overhears a conversation which implies that he is a murderer and will be hanged, so he wastes no time and escapes from the hospital. Outside he bumps into Amanda and some other people who have no idea that he has lost his memory, but they seem to expect Campion to be in charge. There’s an important thing which they expect him to do, but Campion is clueless as to what it is.

When he catches sight of himself in a mirror he’s surprised by how old he looks as he seems at least ten years older than he thought he was. (Which of us hasn’t had that experience!) But worst of all is that he has assumed that Amanada is his wife, so it’s a horrible shock when he discovers that he is only engaged to her and he has been engaged to her for 8 years.

What sort of man is he he wonders? Who would leave Amanda dangling like that all that time? He doesn’t like the personality which seems to be his. It’s all very well being a gentleman but it doesn’t have to be combined with stupidity.

I thoroughly enjoyed this one and I’m presuming that Allingham realised that she needed to make Campion a much stronger character than she had made him before. He needed a knock on the head to give him a different outlook on life, and that’s exactly what she gave him. Written at the beginning of the war and at a time when things weren’t exactly going well for the allies this is more of a spy thriller than a murder mystery and fittingly John Le Carre was an admirer of her writing.

You can read the Guardian article about Allingham and Traitor’s Purse here.

The Tiger in the Smoke features Margery Allingham’s detective Albert Campion. Published in 1952 Campion is now married to a red-head, Amanda, and she seems to have managed to improve him no end. He’s middle-aged now and isn’t as insipid as he was in his earlier years.

Campion’s cousin Meg was widowed at the age of 20 when her husband had been killed in the war. It’s now five years later and Meg has just announced her engagement to Geoffrey Levett, but she has been sent a blurred photograph in the post and it purports to be a recent photo of her supposedly dead husband.

Then Geoffrey disappears and Campion, who isn’t too sure of Geoffrey’s character thinks that he might be involved in the whole thing. But what’s it all about?

Indeed! Read the book, if you’re into vintage crime you’ll really enjoy it. This is the best Margery Allingham book which I’ve read so far, much better than her earlier ones, perfect bedtime or holiday reading.

At 288 pages it seemed to be finished very quickly, this was a bit of a filler and doesn’t feature in my 2011 reading list. Now it’s time to start The Claverings – which is on the list.