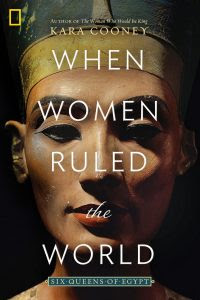 When Women Ruled the World by Kara Cooney is a recent publication from National Geographic and the subject matter is six women who ruled in ancient Egypt at the time of the pharaohs. The introduction is titled Why Women Don’t Rule the World. The epilogue is titled: Why Women Should Rule the \World. In between there are six chapters dedicated to each of the six women who had a measure of power in ancient Egypt. Merneith, Neferusobek, Hatshepsut, Nefertiti, Tawosret and Cleopatra. I must admit I hadn’t heard of all of them before, but I do tend to watch TV documentaries on ancient Egypt, so I wasn’t a complete novice to this.

I’m finding it quite difficult to review this book because although the author has a laid back style which makes it very readable, at times I thought her style was just a wee bit too casual. Call me old-fashioned but I don’t think that the word ‘kid’ should be used to describe a young pharaoh, it just seems so incongruous somehow. There are several pages of interesting photographs featuring statues, coins, jewellery, painted images and such.

I read all 325 pages of the book but at the end of it I don’t seem to have learned an awful lot more than I already knew. This is because there’s very little that anyone knows about what went on in ancient Egypt. Cooney uses the word ‘likely’ constantly, so it’s mainly supposition. However I don’t think the book was written as a means of educating people, it’s mainly about the female/male power balance. But what it comes down to is that at times men were happy for women to fill in and rule the roost until the young pharaoh was old enough to take over. Bizarrely the word ‘regent’ is explained, but maybe in a society unused to such things it has to be spelled out.

The section on Cleopatra is far more specific, but that is inevitable due to her links with the Romans who loved to write about her.

In the UK we’re well used to women having power and being at the head of things, I believe our society just isn’t as paternalistic as some others are. However, at the moment we still have a female prime minister because the men are all very happy to stand back and observe when things are too difficult, they have no intention of taking on the poison chalice and they want a woman to clean up the mess!

I have to say though that I have no time for those black belt feminists for whom every female is good and all males bad. Kara Cooney says: “It is the men who all too easily allow their thin-skinned sensibilities and lust for power and domination over their enemies to lead them to maim and murder.” What a lot of nonsense. Just think of Margaret Thatcher who took us into a war with Argentina (which she provoked) all so that she would get re-elected in the general election – and it worked. History is full of awful women .

Thank you to tlc Books who sent me a copy of this book to review.