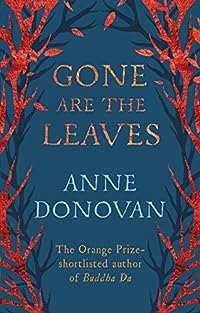 I’ve been away for a long weekend down to the north of England, visiting Lindisfarne, a place I’ve been meaning to get to for years – but the tide was never right when we went past, and we also dropped in on some friends who live a bit further south from there.

Before leaving I managed to finish reading Gone Are The Leaves by Anne Donovan. It’s the first book I’ve read by this author and Jack recommended it. She wrote Buddha Da which was shortlisted for the Orange Prize. I really enjoyed this one and although some of it is written in fairly broad Scots I think it will be quite easy for non Scots to understand. In fact those parts are the most melodic and poetic parts of the book with lovely descriptions and I don’t think it would take long for any reader to get their ‘ear’ into it. There’s a small glossary at the back.

The setting is medieval Scotland to begin with but then the action moves to a mysterious castle in France.

Deirdre is in her thirteenth year and she’s apprenticed to her mother who is an embroiderer in the household of an aristocratic lord and lady. Deirdre is a talented embroiderer despite being so young, a talent which would be of use if she joined a convent. Should she do that or marry a much older man?

When a group of young people arrive from France it’s clear that the lady of the house (never named) is keen on the pretty young males – well her husband is very much older than she is. Feilamort is one of the young boys and he sings like an angel. He and Deirdre become great friends but he knows that as he grows older his singing talent is going to be lost. They both have difficult choices to make.

Deirdre ends up in a convent, it isn’t long before she realises that the life isn’t for her, she misses her mother but that isn’t her only problem.

The action then moves to France, to a castle built into rocks by an eccentric relative of Deirdre’s aristocratic employers. They have high hopes that their daughter will inherit from the childless man, but it isn’t as simple as they had hoped.

This story is told by Deirdre, Signor Carlo and Sister Agnes, but it’s Deirdre’s voice which brings the book to life. I really enjoyed it.