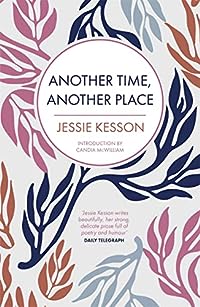 Another Time Another Place by Jessie Kesson was published in 1983. The setting is rural Scotland, early on in World War 2. Kesson writes about what she had experienced in her life so her books are very autobiographical. If you’re the sort of reader who expects to experience a roller coaster of emotions in everything you read then you probably won’t be interested in this type of book which is as much a social history of a time past than anything else.

A young woman who didn’t have much confidence in herself ends up marrying a young farm worker, much to her surprise as she never thought any man would want her. Her life is all farm work, the men around the place have not been called up for war as their work of growing food is essential.

When three Italian prisoners of war are billetted on the farm it causes some upset. It seems to some that the prisoners are more free than the locals, they even have bicycles provided for them, when the locals have to buy their own – or can’t afford them. One of the Eye-ties is after the young wife, he’s after just about anything in a skirt mind you and to be fair her husband only seems to be interested in money.

I really like Jessie Kesson’s writing, her descriptions of the countryside and rural life remind me of Willa Cather and in some ways Irene Nemirovsky too. From a social history perspective I can’t help thinking that it’s just as well that most of the people in such rural communities would have had no experience of any other sort of life, because it was so narrow, all hard work for little money and not a lot to look forward to except the changing of the seasons – or having Italian prisoners of war billetted next to you.