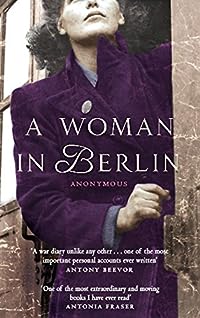 The author begins her diary on Friday 20 April 1945, 4 pm and her last entry is Friday, 22 June 1945 and she identifies herself as a journalist who had travelled widely before the war and had even been to Russia where she had managed to pick up some of the language, something which came in handy when the Russian army entered her neighbourhood. Obviously the women were dreading their arrival as they had heard so many rumours of their behaviour. Young girls were hidden away from the soldiers’ eyes in an effort to spare them from their attentions.

This is a grim read at times but not overly so, I’ve read far worse from Russian women writers writing about their experiences as political prisoners in Stalin’s gulags, and it doesn’t come close to matching what the Nazis did or for that matter the horrific things that are happening to young women abducted by armies in parts of Africa.

Rape occurred but the Russian soldiers spared the old, girls under 18 and young mothers. The author discovered that her neighbourhood had been taken over by what she described as elite troops, and other areas had it tougher with less refined soldiers, not that you could really call any of them gentlemanly. Yes the author was raped several times by various different men, then she realised that she must find an officer to attach herself to, in the hope that that would keep the others away from her. A lack of normal deference within the Russian ranks scuppered that hope to begin with but eventually she was seen as Anatol’s woman, unfortunately he was moved on though so she had to begin again.

But it wasn’t all bad news, the neighbours went from starvation to having plenty to eat, thanks to being able to loot the nearby German barracks and getting gifts of food from the Russian soldiers. The few German men who were around kept a very low profile, some of them had been demobbed from the army and they believed that the Russian soldiers would shoot them, but it was Herr Pauli who infuriated me. He was a lodger in the author’s building, lodging with a widow who lived on the ground floor. The author had moved in with them as her attic room on the fourth floor was dangerous while the battle for Berlin was ongoing. Pauli grudged every morsel that the author ate, and I just longed for her to say to him that if it wasn’t for her they would have had nothing to eat at all, but the German women must have been so used to seeing German men as superior beings that she never did give the lazy so and so a piece of her mind. She realises that looking back when all of the soldiers came home on leave they were pampered by the women, despite the fact that they had been living in areas of Europe that hadn’t been getting bombarded by bombs the way Berlin was.

Later in the book the author realised that if she had stayed on the upper floors of the building she would have been safe from the soldiers as they never went up to the higher floors, her theory on that was that as they were nearly all farm boys they weren’t used to stairs and didn’t like climbing up them.

The widow was eventually raped a few times, despite being 50, albeit a young looking 50, however she seems to have been rather pleased by the experience and went around telling everyone that according to her rapist she had a better figure than the Ukrainian women he was used to!

One woman states that if Hitler had been finished off on 20 July 1944, he would have kept some of his aura. That’s absolutely true as he still had plenty of supporters in modern Germany, if he had been a martyr it would only have made that situation worse.

Towards the end of the book the women discover that the Russian army didn’t give their soldiers home leave so many of the men had never seen their wives for over four years, they thought it went some way to understanding their behaviour, especially when they were drunk.

The identity of the author was obviously known to her publisher but she didn’t want this book to be republished in her lifetime as it had caused controversy when it first was published in Germany in 1954, presumably the women in particular didn’t want to admit to themselves what had happened during the Russian occupation. She outlived the publisher but his wife knew her identity and Marta Hillers apparently lived to be over 90 and died in 2001.