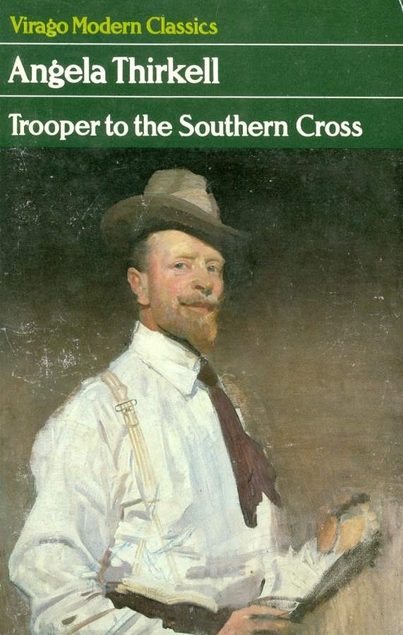 Trooper to the Southern Cross by Angela Thirkell was first published in 1934 but my copy is a Virago reprint. I can’t imagine why they chose the cover image for it which is apparently called Self Portrait by George W. Lambert. It belongs to the Art Gallery of New South Wales, but other than that being in Australia it is a poor choice for this book.

This one isn’t one of Thirkell’s Barsetshire books. It is I’m sure very autobiographical as Angela Thirkell did sail to Australia on a troopship with her second husband just after the end of World War 1. This is an account told by Major Bowen who is newly married and taking his young English wife back to Australia with him. He’s a doctor and had been in the thick of it in Egypt, Gallipoli and France, but now the Australian Imperial Army is sailing home.

There’s a lot of humour in this book although the voyage itself is a complete nightmare as the ordinary Australian soldiers (diggers) were well known for being undisciplined and out of control. ‘Borrowing’ was their way of life and everything that wasn’t screwed down was stolen and stolen again. There are also prisoners on board but they seem to be able to get out and about as they feel like it.

Hundreds of men women and children have been squashed into a ship which had originally been part of the German Navy but had been confiscated from them at the end of the war. Knowing this would happen the German sailors had spent their time disconnecting all the pipes and reconnecting them wrongly. Salt water was coming out of the cold water taps and there was no hot water, but steam came out of some pipes. The ship’s engineers were having a horrendous time trying to rectify it all, and the heat was terrible.

Meanwhile the diggers were spending their time gambling and fighting when they weren’t stealing things. According to the narrator the problems were caused by the large number of soldiers on ship who were of Irish descent, of course the Catholics and Orangemen were at daggers drawn and Major Bowen had the job of patching them all up again. He even had to resort to violence himself when he was attacked.

However the women on board were at no danger from the men who seemed to have a respect for them – even if some of them were real ‘wowsers’, and the most violent of men would meekly stand and take a bawling out from a woman if their child had been woken up by them. Many of the diggers were fathers and had missed their children, so sometimes the nursery was full of diggers taking a turn at dandling the babies.

I prefer the Barsetshire books but this was a hoot too, and very true to life I think as during World War 2 the Australian army was notorious for bad behaviour. After towns were wrecked by Aussie soldiers word would get about and ports refused to allow them to disembark – so I’ve been told.