During our fairly recent trip down to England we stopped off in Bakewell, Derbyshire for lunch and to stretch our legs. A walk along the very scenic River Wye is a must, especially on a lovely sunny day. 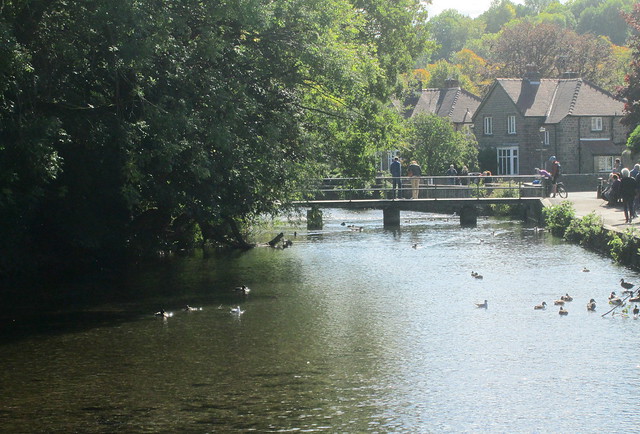 We walked from the car park over this stylish and very ancient gothic arched stone bridge which dates from the 14th century, and if you’re interested there’s a decent second-hand bookshop right at the end of the bridge – or the beginning depending on which way you’re walking – all profits going to local worthy causes. 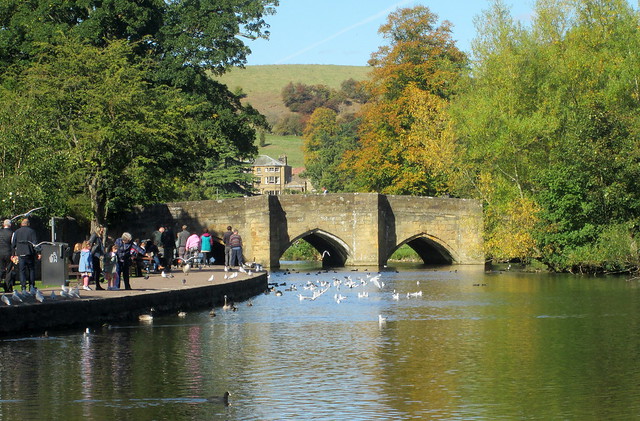 Weirs always add interest to waterways and I noticed that this one doesn’t quite go all the way across the width of the river, one edge has been kept clear so that fish are able to navigate easily up or downstream. 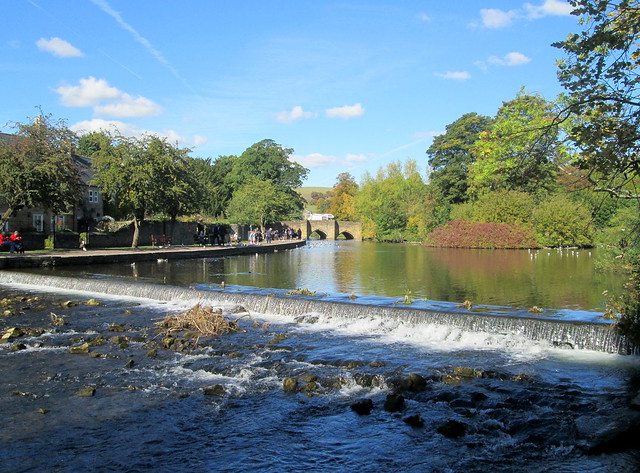 Which is just as well because … 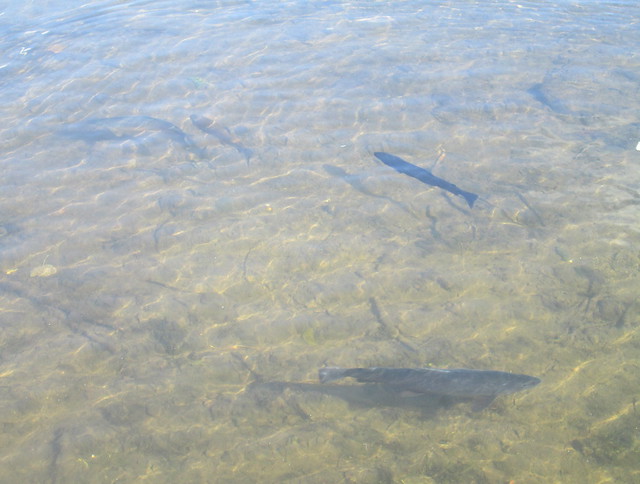 it’s absolutely full of fish – trout and grey mullet I think. They’re big too, most of them being around 18 inches long or thereabouts. The last time we were in Bakewell there were even more fish though and it seemed quite spooky to me as they were all grey and ghostly looking.

As it was such a dry summer the Wye was very low, there wasn’t much depth for the fish to swim in and they were navigating around the legs of the ducks and swans. I’ve never seen anyone fishing here so I suspect it isn’t allowed which is just as well really as there are so many it wouldn’t seem very sporting – like shooting fish in a barrel. 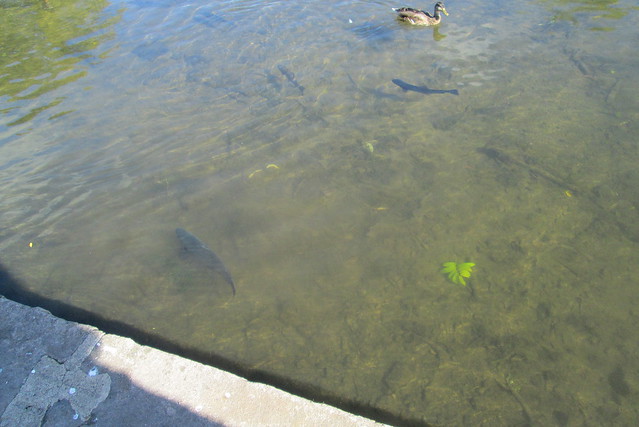 If you’re interested our lunch was of the clotted cream scones variety – delicious.

You can see more images of Bakewell here. Bakewell is another place which we visited on our recent trip to Derbyshire. The river Wye runs through the middle of it and as you can see from the above photo it’s full of geese, ducks and swans. I love towns with rivers, in fact I think it’s the thing that I find most important about a place, I suppose I like them because all old towns were built on rivers and I prefer old places.

Bakewell is very close to Chatsworth, we’d seen it recently on TV and as we’re partial to Bakewell Tart – the Mr Kipling kind, we thought we’d like to try out the original Bakewell Pudding. The problem is there are three shops in Bakewell proclaiming themselves to be the only one selling the original Bakewell pudding, which one should we choose?

We plumped (and that is a significant word) for the ones which looked nicest because it seems that about half of the shops in Bakewell are selling the puddings but most of them look very amateurish and frankly not very appetising. So we bought two slices which were enormous but being greedy we decided to buy a Bakewell tart too. This was the only shop selling tarts, the difference being that the tarts have icing on top. Most Scots have a very sweet tooth (it’s something to do with our cold northern climate I think) and I could quite happily eat a bowl of icing on its own so the tart was just too tempting. We ate the slices first. I have to say that I wasn’t all that struck on the flavour of it. It certainly didn’t taste of almonds which is the most obvious flavour of the Mr Kipling Bakewells. Another bite was required though to try to work out what the flavour was – then another and another and before I knew what was happening I had scoffed the whole thing, still none the wiser as to what it really tasted of. It was very slightly fudge-ish or maybe butterscotch-ish. What was worse was that I thought to myself that it was so heavy it felt like it must have been about 1,000 calories of glook.

All that I can definitely say about the taste is that it was over-egged and I really hate puddings and cakes which taste eggy. So why did I eat it? Who knows? – not me anyway, but if I ever find myself in Bakewell again I’ll be giving the puddings a wide swerve. As we bought a tart too we ended up eating it over the next few days and I must say that it tasted a bit better, due mainly to the icing on top I’m sure. It would have been better with custard!

We’ve had so many meals out over the holidays what with celebrating family birthdays and being away, also it was our 35th wedding anniversary earlier in the month and we just had to have a meal out then too and as a friend said to me – the main reason for eating out is to have the lovely puddings. The result is that I’ve put on an amazing three inches around my waist which I only discovered when I tried to put on my favourite skirt. It’s down to two inches now but I bet it takes ages to shift those two extra inches. Such is life!