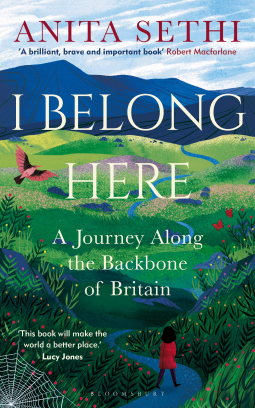 I Belong Here by Anita Sethi is subtitled A Journey Along the Backbone of Britain and is due to be published on the 29th of April 2021 (Bloomsbury) and as it’s tagged ‘Outdoors and Nature.’ I was a bit disappointed that the first fifth of the book the author concentrated on writing about a horrendous experience she had while travelling on the Trans Pennine railway line when she was racially abused at great length by a fellow passenger. Luckily she was able to film some of it on her phone, and she also had good support from the railway staff. This culminated in the perpetrator being taken off the train and handcuffed. Eventually he pled guilty, but the experience haunted/haunts Anita and she keeps returning to the subject throughout the book. This isn’t surprising as the man had threatened to set her on fire. If you live in the UK you’ll probably remeber the case being on the news. I hope writing this book was a cathartic experience for her.

I can only imagine how annoying it must be when people keep asking you where you come from because you have brown skin, as if generations of brown and black skinned people haven’t been born in Britain. When Anita Sethi met Prince Charles he asked her where she came from and when she replied Manchester he said – you don’t look like you come from Manchester. Proving that Charles is indeed his father’s son. To be fair though, I bet that if I ever met him he would have had to make some sort of remark about me having red hair! That’s just another thing that can rile up strange people, as can a Scottish accent as I know myself, having been made to feel very unwelcome by some people while living in the south of England – or even just visiting England. Brexit has definitely emboldened bigots.

I had been under the impression that this was a book about nature and hill walking but that part of the book seemed like a long time in coming, which I found quite frustrating, but when the nature writing began I was impressed by it, and I hope she writes more in that vein. Her descriptions of rock formations and water ‘forces’ as waterfalls are called in ‘the north’ (of England) made me take note of the places she visited with a view to following in her footsteps, when we’re allowed to travel again – if I’m not too old by then!

The author does go off at tangents at times so there are a lot of subjects covered in the book, including grief – after the unexpected death of her friend who was only 28. She writes about the etymology of some words which I always find interesting, immigration and the Windrush scandal, mental health and ‘forest bathing’ – to name just a few subjects.

All in all I enjoyed being in Anita Sethi’s company most of the time, and meeting the people she had had conversations with along the way. I would have preferred less of the angst and more of the nature though.

I was sent this ebook by Bloomsbury for review via Netgalley.