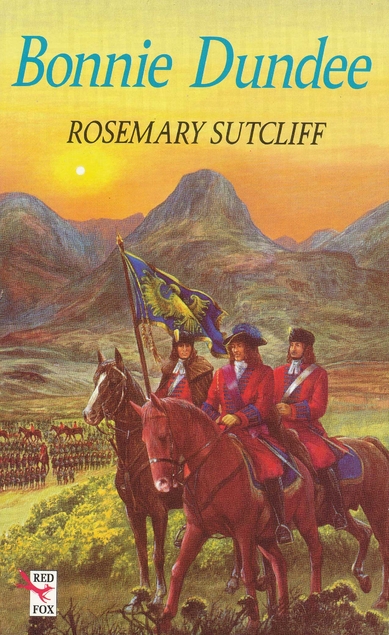 Bonnie Dundee by Rosemary Sutcliff was first published in 1983 and it’s a Puffin book. Previously I’ve enjoyed quite a few of Rosemary Sutcliff’s books for adults and I found this one to be well written and informative, very early on in the book I learned that a lorimer was a maker of spurs and horse accoutrements. I had just thought of lorimer as being a surname.

Young Hugh Herriott is an orphan and is living in the Highlands with his mother’s family. His mother had more or less been cast off by her family as she had married a travelling artist against their wishes. Hugh’s grandfather had taken him back into the family but Hugh was very much an outsider, just tolerated by the rest of his relatives. It is a turbulent time in Scotland (when isn’t it?) and religious zealots in the shape of Covenanters are being hunted down by government soldiers. A close encounter with some redcoats makes Hugh realise that he’s happier on the side of the redcoats than with his Covenanting family. If you thought that ‘redcoats’ were always English think again, there were plenty of Lowland Scots in that army.

In truth it’s seeing Claverhouse (Viscount Dundee) that pushes Hugh to leave his family and eventually he finds himself as part of Claverhouse’s household which leads him to follow him into battle. Things had come to a head when the Catholic King James succeeded to the throne on his brother Charles’s death. When James’s wife gives birth to a son the Protestants at court are determined to bring William of Orange over from Holland to push James out, William’s wife is a Stewart and of course they are Protestants. Some deluded people are still fighting this religious mess – it’s what has caused all the trouble in Ireland.

So begins the Jacobite cause with James eventually legging it to France after Claverhouse or Bonnie Dundee as he was nicknamed pays the ultimate price. If you want to learn a bit of Scottish history painlessly then this is an ideal read, a bit of an adventure tale woven into historical fact, and very atmospheric.

I’m fairly sure that Sutcliff’s mother must have been Scottish as she’s very good at writing Scots dialect, and her mother’s name was apparently Nessie – another clue I think. Rosemary Sutcliff spent most of her life in a wheelchair which makes her ability to write such great descriptive scenes all the more impressive as her own experiences must have been sadly narrow, especially as she lived at a time when access for disabled people was not great.

This is one of those books that you continue to read, knowing what the outcome must be – but daftly hoping for a better one.