It’s the second of January but some of my neighbours have taken down their Christmas decorations already. Mind you those are the people who put up their decorations in mid November! I did manage to take some photos of the lights in a few of the places we visited pre-Christmas, below are the street lights in Dumbarton, the small town that I grew up in. 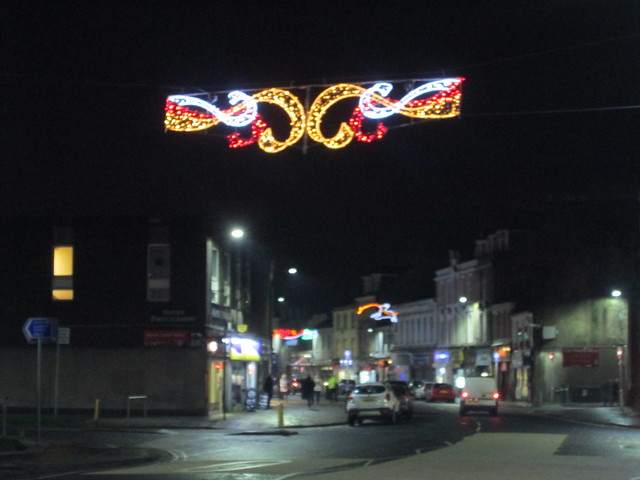 I must say that I was really impressd with the town’s efforts. I actually think that they’re the best ones I’ve seen for a long time. I’m fed up with just bright white lights that so many places seem to have opted for, the yellow and red fairly cheered the place up. 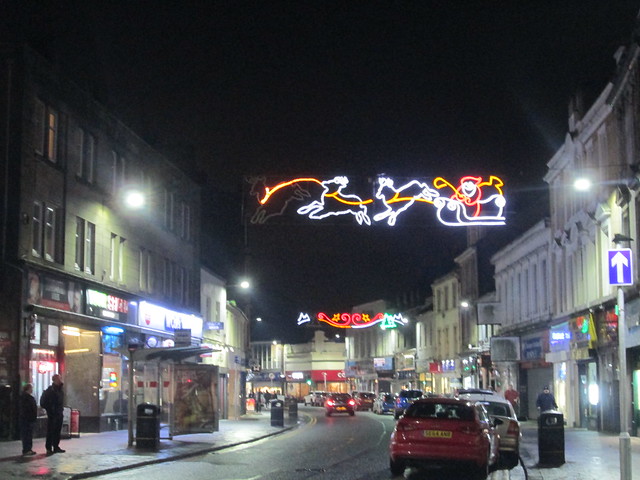 Tha lights of the “Artizan’ area (which by the way is NOT where the old Artizan was) aren’t quite so nice I think, but they’re better than nothing I suppose. 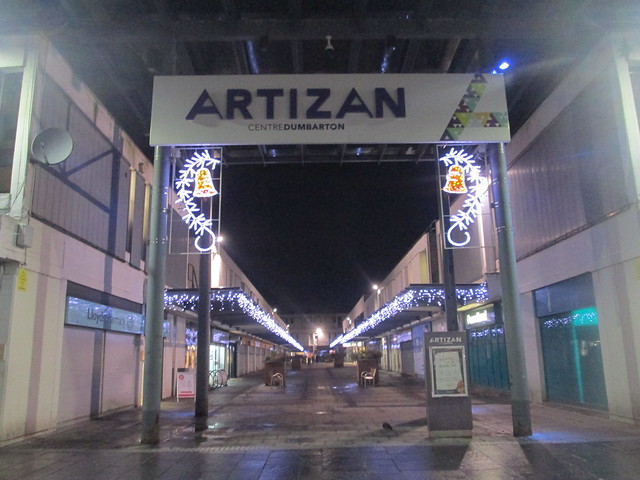 The permanent lights that enhance the old stone bridge below are atmospheric. 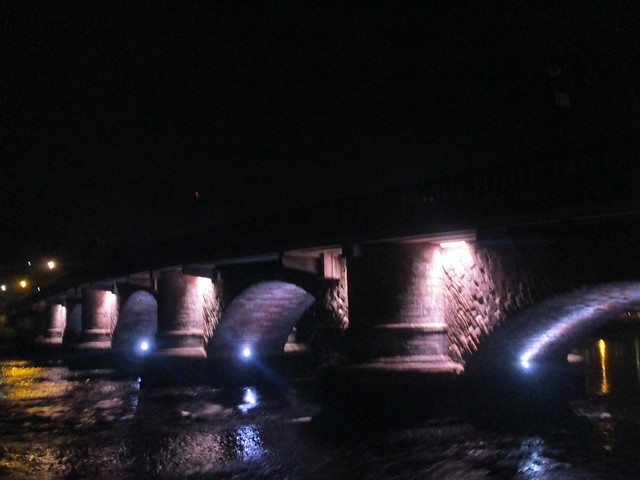 You can get an idea of what it looks like in daylight from the photo below. 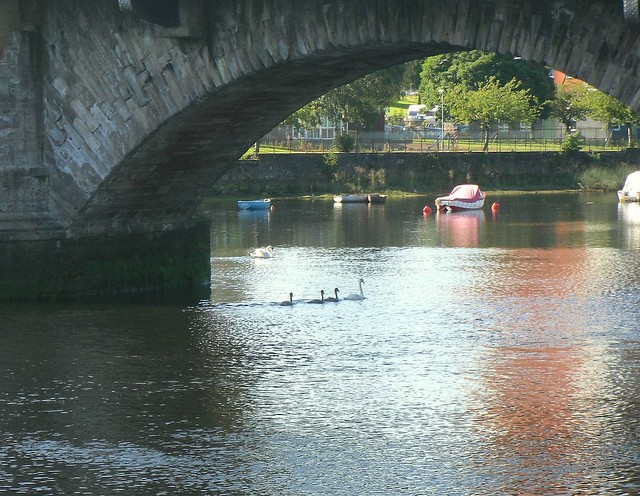 In Glasgow George Square is the focus for the Christmas activities, in my young day that used to mean a nativity scene, but nowadays they plonk a fun fair on it. It was ‘sear your eye balls’ bright this year (2018). 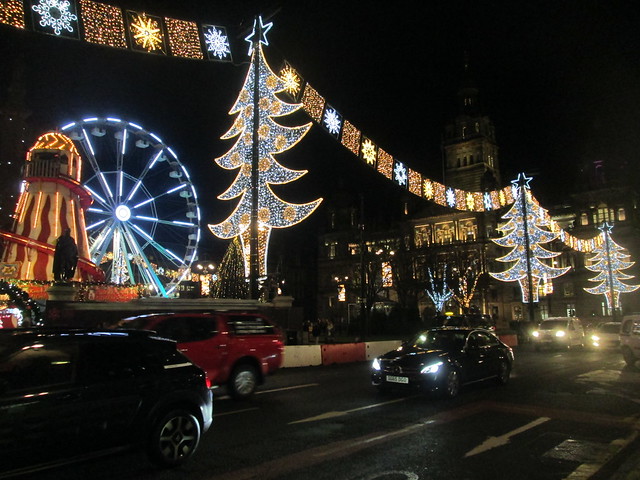 West George Street in the Merchant City area was the place to go if you were looking for something a bit more elegant. The church doorway was flanked by two Christmas trees, it looked pretty in the distance anyway. The church (St George’s Tron) is actually in Nelson Mandela Place though, the first street named after him – long before he was released from prison. 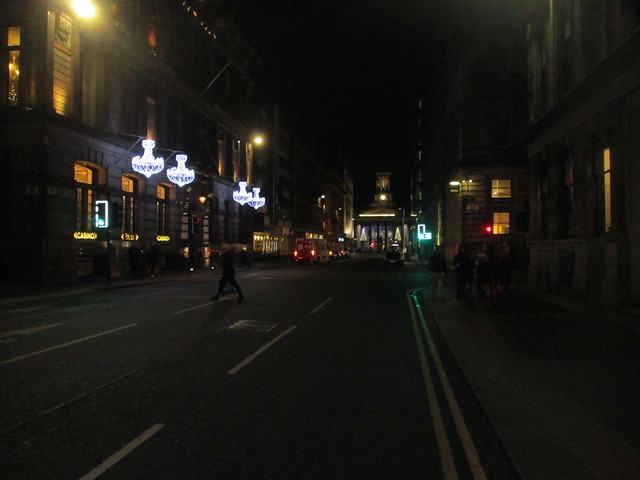 And so went another year – in a flash!

It was a dark and dampish night when we decided to walk into the city centre to have a look at Glasgow’s Christmas lights. Below is George Square which has played a part in Glasgow’s more recent history as it was the location of mass protests in 1919. It is the only time that tanks were deployed in Britain. You can read about it here. 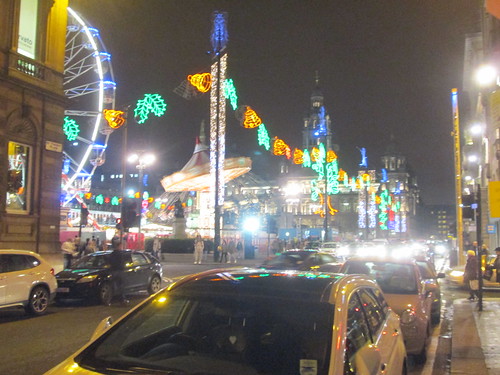 It has probably been about 15 years since I had seen George Square all lit up at Christmas, so I must admit that it was a wee bit of a shock to see a big wheel and those flying swing things actually in the square, but I don’t suppose there is anywhere else they could go. 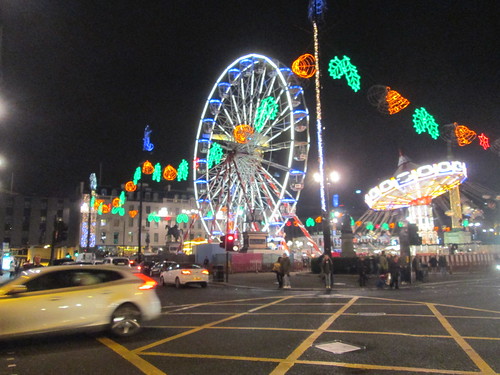 I’m pretty sure that they used to have a mini ice rink set up in George Square years ago but thinking back to my childhood memories of the place at Christmas it’s really only the nativity scene which sticks out in my mind. I don’t know why that should be as I know that I always found it to be a bit tacky looking. Anyway the fairground attractions seem to have taken over. 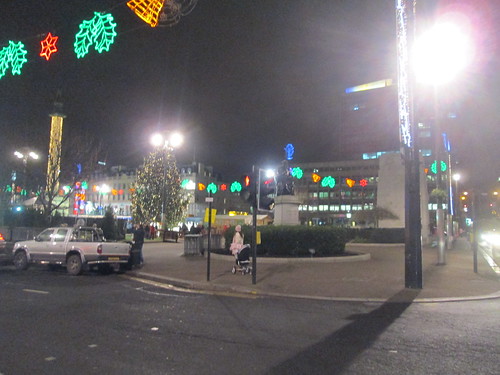 The war memorial is just visible on the right hand side of the photo above. And there it is again in the photo below, it’s the massive light coloured stone monument. The building which is lit up behind it is the Glasgow City Chambers, a really beautiful building. At the time it was built there was consternation over the cost of it all as it is marble lined but as they said at the time – the marble meant that they would never have to pay out any money to have it re-decorated, it just needs a wash down every now and again. 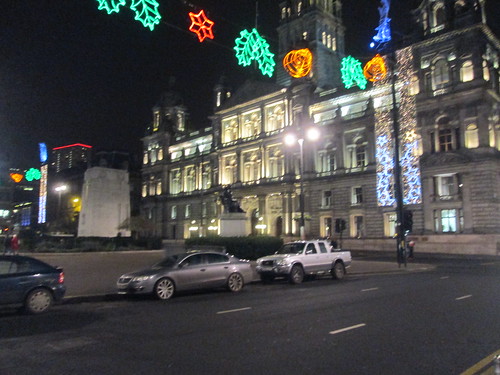 You can see images of the Glasgow City Chambers here.

Below is the central portion of the City Chambers. 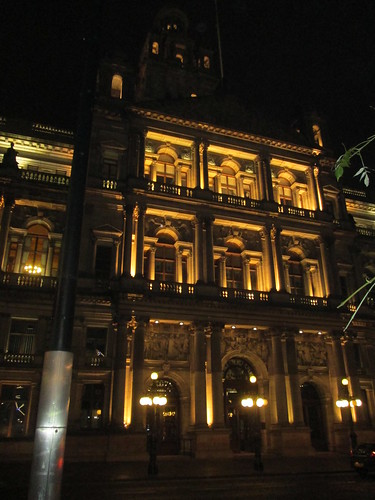 If you want to see some daylight photos of George Square have a look here.

A bit of the inside of the City Chambers was used in the film of Edith Wharton’s book House of Mirth and more recently Glasgow has been used as a stand in for San Francisco. You can read about some of the films which have been made in Glasgow here.

You might have noticed that I’ve had a wee bit of a blogging break over the last few days. In fact I/we have been in that place which I’m pining for. Not the ‘wild American west’ as some people have thought in the past but the west of Scotland where life is altogether more pleasant and civilised. More specifically I’ve been in Glasgow, I wanted to have a look at the Christmas lights as it’s years since I’ve visited the city centre, by the time we visit the bookshops in the west end it’s time to start thinking about the drive back to the east. Staying overnight in one of those hotel chains was great and we were just a short walk away from the city centre. 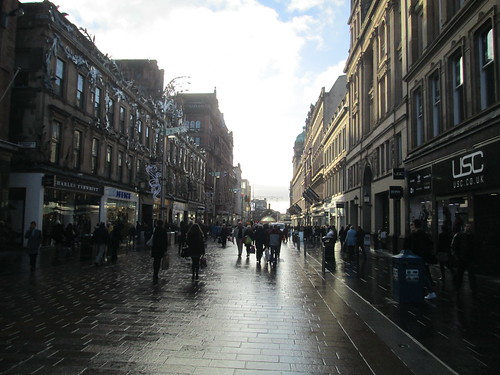 I took quite a lot of photos but I haven’t sorted through them all yet. Like most people I suppose I’ve taken photos of things all over the place but it’s only in Glasgow that the inhabitants stop and chat with you. In fact I’ve come to the conclusion that whereas people in most cities avoid eye contact with any strangers – in Glasgow the inhabitants are actively seeking to strike up a conversation. It makes everything so much more enjoyable.

I was listening to a Scottish football programme on the radio last week, not that I’m a football fan but we were in the car and Jack was listening to it. Anyway, one of the pundits happened to say that he hated the word wean as it is a west of Scotland word and he associates it with the nastiness of Glasgow!! or words to that effect. I can only think that he is so prejudiced that he has never actually visited the place, apart from football venues, what an eejit! 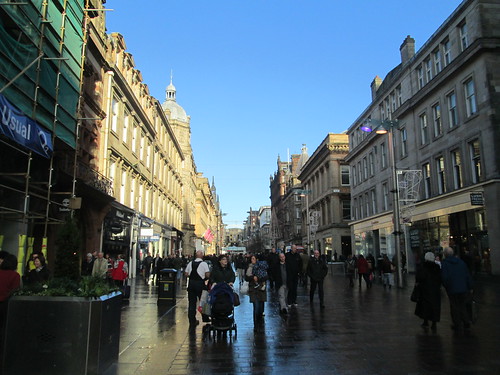 Below is a photo of Buchanan Street at night. The Christmas lights aren’t bad I suppose but I still don’t like those bright white LED lights, the old creamy coloured lights were much easier on the eyes and I wish they would have more colour in general. It was Thursday – late night shopping night, just before the shops closed at 8 o’clock so it wasn’t as busy as it had been. You can see images of House of Fraser department store here Glasgow used to have loads of wonderful department stores but the best ones have all closed down and we are left with House of Fraser and Debenhams. 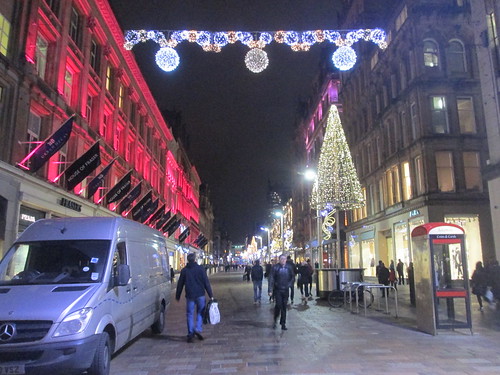