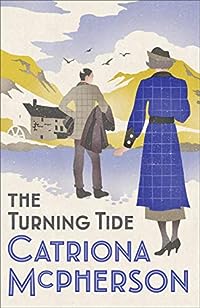 We’ve been dashing all over the place this past week trying to show Peggy some of our favourite places, and one of them is Cramond, an old village not far from Edinburgh. Cramond is a really ancient settlement with evidence of occupation as far back as the mesolithic and bronze ages as well as some of the Romans having been there. 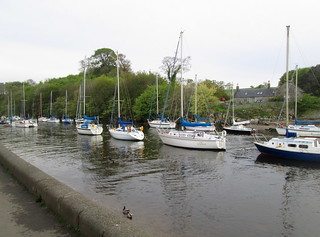 You can see lots of images of Cramond here, but I just took the couple of photos above and below of some lovely boats. Click them to enlarge! 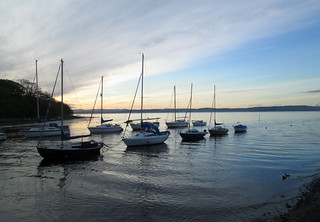 Last Saturday we stopped off at Cramond after spending the afternoon at Ingliston Antiques Fair, near Edinburgh. Cramond is a wee coastal village near Edinburgh and we pass it on the way home to Fife. It was a favourite destination when our boys were wee. The photo above is of the hotel at Cramond, the village is almost a suburb of Edinburgh now but at one time it was apparently popular with Edinburghers looking for a weekend getaway from the city, of the ‘dirty weekend’ variety. I haven’t read Muriel Spark’s Prime of Miss Jean Brodie, mainly because I’ve seen so many different dramatised versions of it, but I remember distinctly the actor Gordon Jackson in the 1969 film trying to persuade Jean (Maggie Smith) to go away with him for the weekend to Cramond – so naughty! Most of the buildings have been whitewashed, as is traditional with coastal houses. These buildings are actually by the harbour just where the River Almond flows into the Firth of Forth. Cramond is thought to have been first inhabited in 8500 BC which makes it the oldest settlement in Scotland. The Romans settled there around about the year 142 but only stayed for 15 years or so, after which they retreated back to Hadrian’s Wall. The photo above was taken from Cramond, looking over the Firth of Forth to Fife, the village of Aberdour is more or less in the middle of the photo but most of it is obscured by an island, the bigger island is called Inchcolm and we had a great afternoon out there last year, if you want a closer look at it take a peek here.

You can clearly see some wind turbines which have been popping up in quite a few locations. They’re controversial but I quite like them although I don’t suppose I would want one on my doorstep. That well known pain in the neck Donald Trump has been trumpeting on about them just today on the news as there are plans for some turbines to be built in the sea near his golf course north of Aberdeen. Apparently he hates them and thinks they will kill tourism in Scotland, and he would have built his golf course in Ireland if he had thought that his view was going to be blighted by turbines. If only we had known then and we could have waved him cheerio as he departed in high dudgeon for Ireland, and the people in Aberdeen wouldn’t have to put up with yet another golf course!