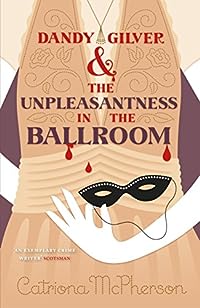 The Unpleasantness in the Ballroom is the latest Dandy Gilver investigation from Catriona McPherson. This one is set in Glasgow in 1932 and the whole city is dance crazy. There is a big dancing competition coming up and none other than Victor Sylvester will be officiating.

The Locarno Ballroom in Sauchiehall Street is the venue and Theresa, better known as Tweetie is one of the contestants. She’s the very spoiled and self-centred daughter of a wealthy businessman and her dancing partner is a young man who works for Tweetie’s fiance. The other contestants are very much more down to earth, typical Glaswegians.

When Tweetie starts to get various threats, such as being sent a dead stuffed bird – her parents are understandably worried and call in Dandy and her side-kick Alec to try to track down the perpetrator, and keep an eye on Tweetie.

This was a good mystery with a particularly enjoyable setting for me as I knew everywhere mentioned, and in fact the street that I was born in is even given a mention. The various different types of tenement flats are described in detail which will be of interest to people who haven’t frequented any.

I was a bit disappointed that gangsters featured in this book – thinking that yet again Glasgow is being portrayed as a wildly violent place, but in a note at the end McPherson does say that gangsters had been a problem in the city up until the early 1930s, after which the police seem to have got to grips with the problem.

If you want to have a wee keek at what The Locarno actually looked like, click here.

This book counts towards the Read Scotland 2015 challenge.