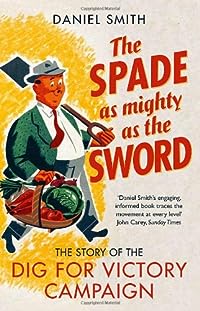 The Spade as Mighty as the Sword by Daniel Smith is the story of the World War 2 Dig for Victory Campaign. Originally it was called Grow More Food which as I’m sure you’ll agree wasn’t a terribly inspiring name for such a campaign. It was apparently Michael Foot who went on to become the Labour leader who came up with the name Dig for Victory when he was a journalist for the London Evening Standard in 1939.

Memories of the food shortages during World War 1 were still fresh with many people and it was realised that the outcome of the war would rely on having a population that wasn’t literally starving. So began the campaign to encourage people to dig up their lawns and rose beds and replace their flowers with vegetable plots. It was amazingly successful and people who had never even thought of growing anything before became quite obsessive about their vegetable growing. As I’ve rarely been able to grow anything beyond herbs and potatoes I’m amazed at the success of it all, although in those days people were using an awful lot of poisons on their crops, including things containing cyanide! However it doesn’t seem to have done them any harm.

In fact after six years of war it seems that the population had thrived on their rationed diet and they had never been so healthy before. It was however a boring diet and people rarely felt that they had had enough to eat although there were people such as Marguerite Patten developing recipes to help housewives with feeding their families.

This book features quite a lot about the politics of the times, but it’s always interesting. I really enjoyed it and it has inspired me to try out some more of the wartime recipes that I have in a book. I must give Woolton Pie another go.

One mild annoyance is that whiling away is spelled wiling away. No doubt this is partly because English people pronounce ‘wh’ as ‘w’ – which causes them confusion with words such as which and witch sounding the same – or whales and Wales. I wonder when they gave up on ‘wh’ sounds as it must have been sounded at some point otherwise they ‘h’ would never have been in those words.