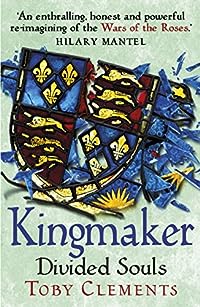 Kingmaker Divided Souls by Toby Clements was first published in 2016 and it’s the second book in the author’s Kingmaker series which begins with Winter Pilgrims, the second one is Broken Faith. I hadn’t read either of those ones as I was given this book by a friend who had bought two copies by mistake (we’ve all done it) and as I had recently read Conn Iggulden’s Wars of the Roses series I thought I would manage this one history wise anyway – which I did.

Toby Clements’s series seems to concentrate on telling the story from an ordinary person’s point of view rather than through an exalted character, so it’s all quite domestic and doesn’t have an awful lot of battles in it although there is some fighting.

The story begins just after Easter in 1469, Thomas and Katherine Everingham have built a little home for themselves on their employer’s land, but everything changes for them when their boss dies suddenly and his widow’s sons arrive to take over the running of the estate and they reluctantly have to leave their home and workplace and take to the road again with some friends, one of whom is heavily pregnant.

It looks very much like war is about to break out again with the Earl of Warwick conspiring against King Edward, mainly because of the behaviour of the king’s in-laws. The earl is scouring the countryside to gather up a large army to attack the king, but Thomas and his friends have had enough of fighting in their lifetime – not that they have much choice.

This was a really good read with adventure, intrigue and some great characters.