On our recent road trip we went back to Braintree in Essex on a nostalgic journey as we fancied seeing what the place was like 30 odd years after we left it. I thought we might as well go to Witham too as it’s just a quick hop from Braintree. I used to get the train every morning to work as the ‘librarian’ in the Essex Area Health Authority building. At that time Witham always seemed a bit wealthier than Braintree but for some reason the roles seem to have been reversed and it was looking a wee bit down at heel. I can’t even remember seeing this ancient building before but I must have because it has the date on it – 1300. I can hardly believe that there’s an ordinary building so old which is still in use. It seems quite mind-boggling but maybe there’s just one tiny bit of it which is so ancient and the rest has been built on to it over the years. The photo below is of Dorothy Sayers’s house and the building I worked in was situated behind it, I could just about see into the back garden but of course she was dead by the 1970s. I started reading Sayers’s books in the early 1970s and I was amazed to discover that she had lived in Witham. I thought that the house had been bought by the Dorothy Sayers Society for use as a museum but it seems to be a private home. There is a plaque on the wall. This house has been improved quite a lot over the years, I remember it as being quite shabby. You can’t really tell from this photo but it’s in the middle of a terrace and the house on the right of it had been converted into a cinema. Apparently you could hear every word of the films which were shown there in Dorothy’s house. How she managed to get any writing done under those conditions is beyond me! Mind you, she did die in this house. This is me outside the house, taken by Jack just as my expression was slipping and I was about to say hurry up as I was feeling and looking like a complete eejit standing there with the locals obviously thinking to themselves not another one! And that was Witham, I don’t think we’ll want to visit there again but I’m glad that we did this time around. As you can see, my hair is needing cut again. The question is – will I pay a horrible amount to get it done by a hairdresser or will I hack at it myself? 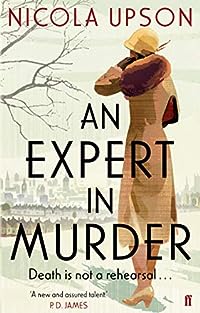 Recently I’ve been buying and reading quite a few books by Josephine Tey so when I saw that Jo at The Book Jotter was reading this book featuring Tey as a character I thought I would see what it was like.

There have been quite a few books published which have been written in the style of 1930s crime novels but I’m not sure if this one was meant to fall into that category.

It begins in a classic vintage crime way with a train journey, the quickest way to get that 1930s ambience. Tey who has had great success with a play in London’s west end is travelling from Scotland to London and falls into conversation with a young woman, Elspeth, who is a big fan of the theatre.

That’s as far as I’m going with the story because I don’t want to spoil it for anyone. I think it’s a good read if you’re into crime but I think I would have enjoyed it even more if Nicola Upson hadn’t woven the story around Tey’s life. For me it almosts seems like cheating when it’s a work of fiction which has sort of hi-jacked a real person and I’m not really keen on the idea. I can see why it would appeal to a publisher though as a sort of gimmick. I just didn’t think it was necessary.

I thought the twists and turns of the story were very good and that should have been enough. It reminded me a lot of Dorothy Sayers’s Strong Poison in parts especially her Harriet Vane, which is no bad thing I suppose.

Being a bit of a nit-picker there were a few things which annoyed me which other people probably wouldn’t have picked up on. One was a character’s use of the phrase, ‘Tell me about it,’ in that modern way which I don’t recall ever hearing anyone use before the 1980s. There was quite a bit of use of the F word, which really doesn’t bother me at all but it doesn’t fit in with vintage crime and it jarred with me for that reason. I know it would have been used in reality. Lastly, at one point Elspeth’s mother takes her large hat off and puts it on the floor!! It’s supposed to be the 1930s when women didn’t remove their hats at all unless they were sitting in their own home and they would definitely never put one on the floor. I told you I was nit-picking.