The day after we inadvertently visited the lovely wee village of Collessie we managed to find Backhouse Rossie Estate. It was a gloriously sunny day, but dare I say it – too hot! The gardens are wonderful, the only downside being that we were there just after the climbing roses had finished, I must remember to go earlier next year. The estate is actually on the road to the small town of Auchtermuchty – yes that IS a real place name. 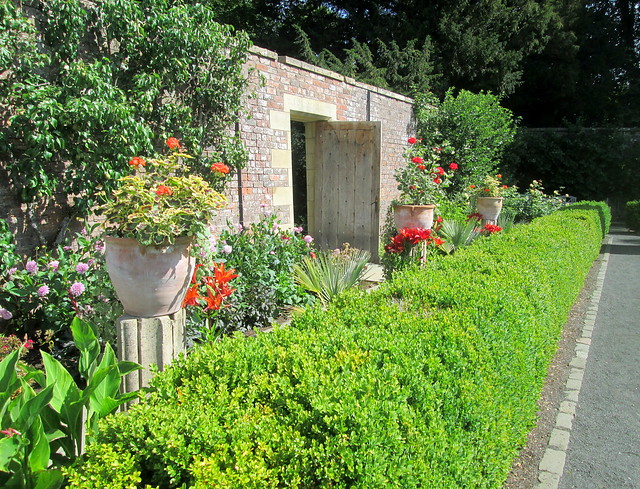 As you can see, there’s woodland beyond the walled garden. We did go for a walk there, mainly to get into some shade. 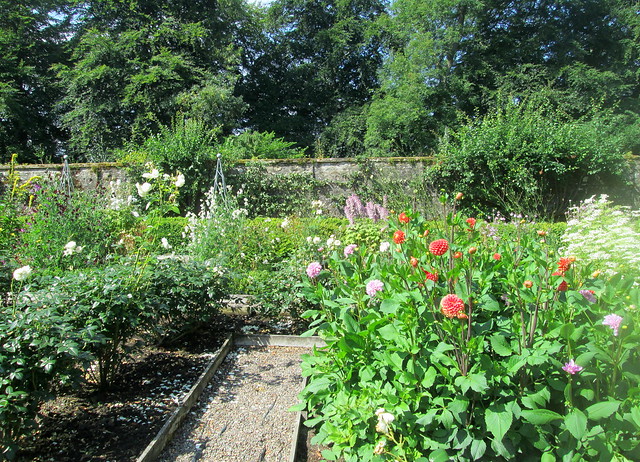 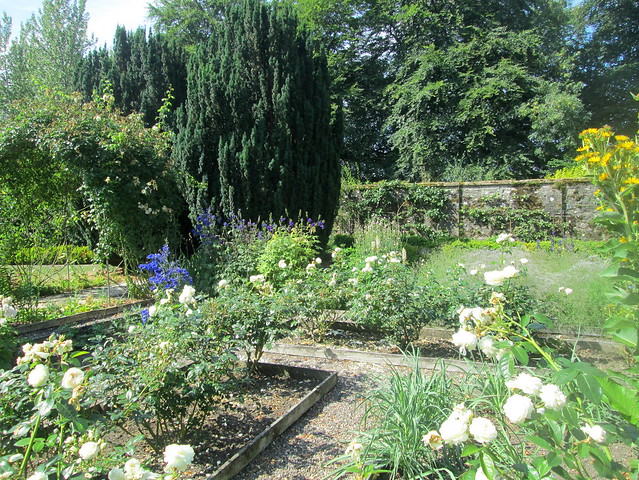 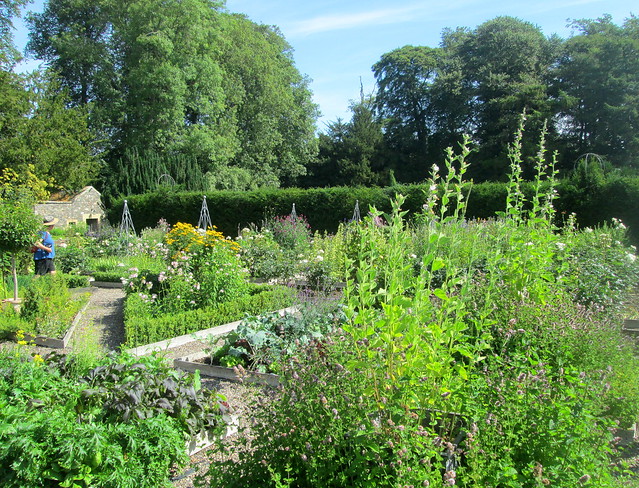 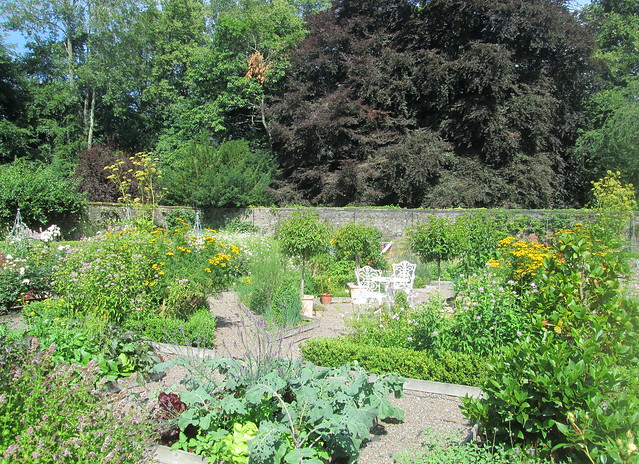 This fountain is one of the more traditional water features. 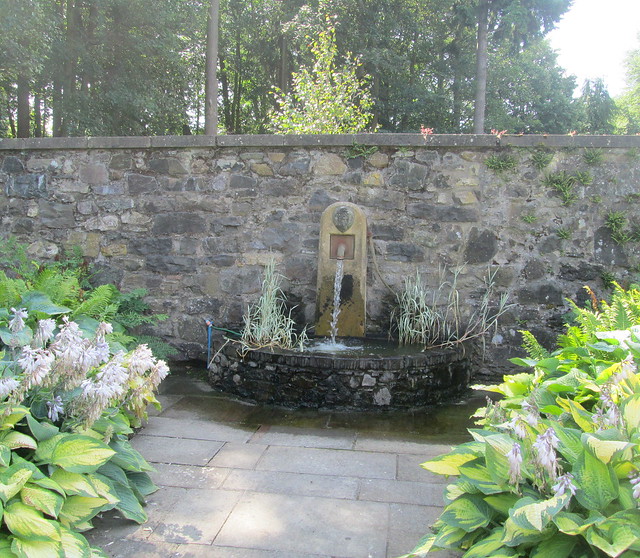 There’s a rill leading to a pond. 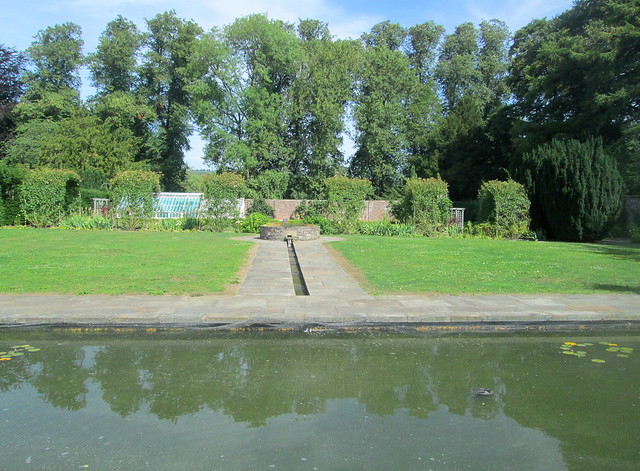 You can’t really see it in the photo below but the rill is filled by the water which bubbles up from this stylish sculpture. 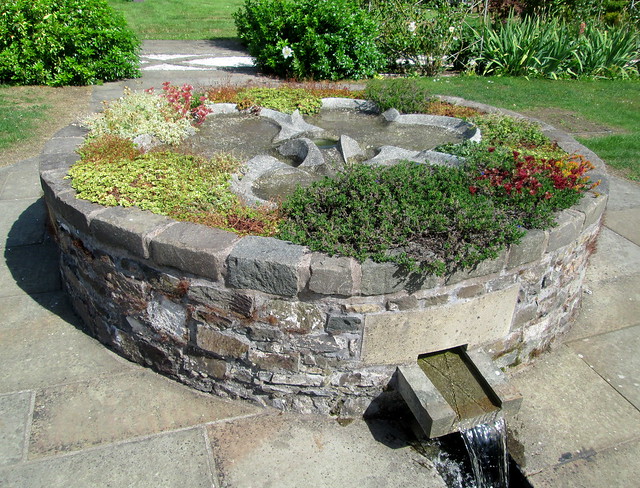 The photo below is of the East Lomond hill, a view over the garden fence, not a bad setting for an estate. 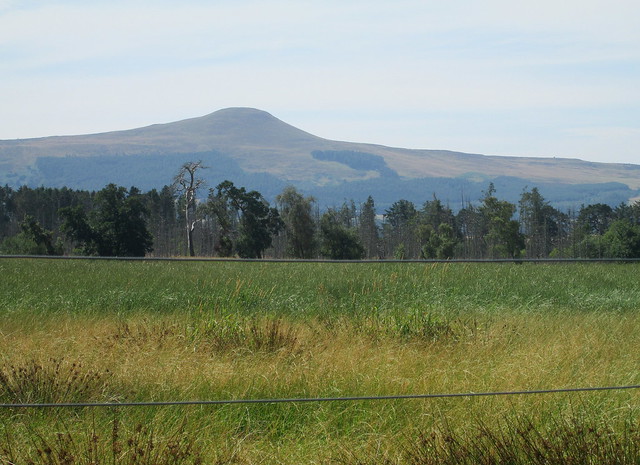 I took lots of photos so there’ll probably be a couple more blogposts about this lovely estate garden.

It’s time to dust off your walking boots again and blow some of those cobwebs away if you’re feeling energetic enough. This time we’re going up the East Lomond in Fife. Don’t worry, it’s an easy one! I took the photo below from the car park and it’s looking over to the Firth of Forth in the distance with the town of Glenrothes in between. I hate having to get into a car to reach a decent hill-walk. This patch of heather which is just coming into bloom is apparently the largest bit still growing in Fife according to a signpost nearby. That was a bit of a shocker to me. I must admit that I never think that heather is anything to write home about. I think all those homesick Scots living in far-flung countries must have been looking back nostalgically and writing romantic songs about it. When I lived in England and was homesick I just went out and bought a Corries album, something which I would never have done in Scotland! Now you can see where we are headed, the top of the East Lomond. At this point there’s a path as you can see, quite well worn as it’s a popular walk but we only saw two other walkers. Sometimes there are mountain bikers, runners (mad) and hang-gliders (madder). Not far from the top now, you can just see the village of Falkland down below. If you want to see what the village and estate look like you can see some photos of older Falkland posts of mine here. There will be some of a previous West Lomond walk there too. The photo below is looking to the north to Perthshire in the distance with the edge of Falkland village on the right and Falkland House and estate to the left. Falkland House is now a school for autistic children and children with special needs, but anyone can walk in the estate grounds and it’s a good walk if you don’t want to go uphill too much. It’s popular with dog walkers, keep them on a lead though as there are a lot of sheep about. The photo below was taken looking east over to Largo Law in the distance. From here it looks like a small bump just to the left of centre in the landscape but is in fact quite a large hill. ‘Law’ is a Scots word for hill. The photo below is looking east from the top of the East Lomond. There are actually a couple of reservoirs there but one of them looks almost empty, it has been unusually dry for quite a while now. Below is looking over to the north west. Perthshire in the distance. This is a photo of a ladybird on the distance marker at the top of the East Lomond. Like most people I love ladybirds but this is just the third one which I have seen this year. I think that very long winter we had must have been too much for a lot of them as they hibernate, often in conifers. Here’s the proof that we actually made it to the top, as you can see we are a bit windswept, sunglasses are required up there mainly to keep the wind out of your eyes! There was a flock of sheep in a field to the right as we were going up the hill, we could just see a few of them but decided not to get any closer and disturb them. But on the way back downhill, these two decided to break ranks and come to take a look at us, a sheep and her fat lamb who was still keen to keep close to mum. We couldn’t decide whether they were suspicious of us and ‘seeing us off’ as they followed us down hill or if they were lost and thought we might know the way home! So are you feeling bright and breezy after getting some virtual fresh air? I didn’t feel too bad the next day either, which was a nice surprise. I hope we can get a few more different hill walks under our belts before the winter sets in.