I’m doing really well with my 20 Books of Summer list, I think I’m just about half-way through it. 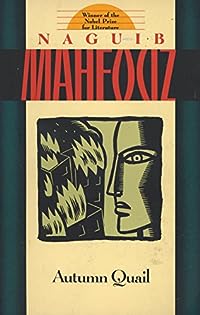 Autumn Quail by Naguib Mahfouz is a really quick read at just 167 pages. Mahfouz won the Nobel Prize for Literature in 1988. Autumn Quail was written in 1962, but the book is set in 1952 when there was a revolution with Nasser overthrowing the Egyptian king.

Until then Isa a-Dabbagh had been a very successful civil servant, having been promoted very quickly and further than ever expected, particularly for someone who often floundered at work – I’m sure we all know the sort! It’s his politics that have led to this situation, he backed the right side, but of course – come the revolution his situation changed completely and he ends up being pensioned off with two years salary. But it wasn’t his salary that accounted for his gorgeous house and lifestyle, it was the many bribes that he had accepted over the years and he knows that he can expect no favours from the new regime. Isa quickly goes from being the arrogant official who is followed by an entourage of sycophants to a nobody – in no time flat. His fiancee isn’t interested in marrying him under the new circumstances.

Isa doesn’t take well to that and refuses to take a salaried job that his cousin offers him. He moves away from family and friends, from Cairo to Alexandria where he lives a lonely life until he takes up with a young woman, but ultimately Isa abandons her.

This novella has a very abrupt ending, intentionally obviously as Isa can’t make up his mind as to what he should do in the future. Should he look ahead into the new Egypt or just wallow in self-pity?

I liked this book, enjoyed the writing and felt that I learned quite a lot so I’ll definitely read more by this author in the future. Mahfouz spoke up for Salman Rushdie when a Fatwa was taken out against him. This culminated in Mahfouz being attacked, a man stabbed him in the neck and the injury more or less stopped his writing career as he couldn’t write for more than a few minutes a day.