It was only after I started reading Emily Climbs by L.M. Montgomery that I realised that I was reading the second book in a trilogy – not ideal, but I did enjoy it. When Joan mentioned that the whole set was available for the Kindle for just 49p, it was a no-brainer, even although I’ve bought hardly any books for my Kindle as I tend to use it for classic books that are free as they’re so ancient.

So I caught up with Emily of New Moon which tells the sad story of how Emily was orphaned after the death of her beloved father. Her parents had run off to get married and more or less been disowned by their families but her mother’s family stepped up to give Emily a home albeit with great reluctance, drawing straws to see who in the family of elderly aunts and uncles would be unfortunate enough to have to take on the burden of Emily’s upbringing.

It falls to Aunt Ruth and Aunt Elizabeth of New Moon to take Emily in. It’s a strict Presbyterian household which means no frivolous fun is allowed and life is grim, especially as poor Emily has to share a bed with her eldest and most austere aunt who even disapproves of Emily writing her stories and poems which are condemned as being lies. 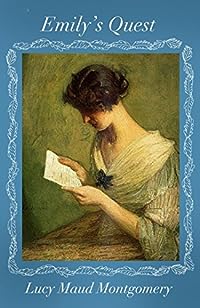 In Emily’s Quest she has managed to persuade her relatives to allow her to go to college, but she has to promise not to write any fiction for the three years that she’ll be there. The older Emily doesn’t seem to be quite as charming, she’s grown out of the puppy stage I suppose and has to think of training to earn a living. Eventually she is allowed to resume writing fiction and Aunt Ruth is amazed to discover that Emily can actually make money at it – that’s not to be sniffed at at all. Emily is pursued by all sorts of men but she disappoints her family by turning down her cousin’s offer of marriage – they’re hoping to marry her off within the family as her cousin will inherit New Moon eventually and it seems an easy way to solve the problem of Emily’s future. Thankfully she has other ideas. The idea of cousins marrying gives me the shudders.

These books were a perfect read for me tucked away in my cabin whilst sailing the Baltic Sea which was so flat and steady I often had to look out of the window to see if we were still actually sailing!