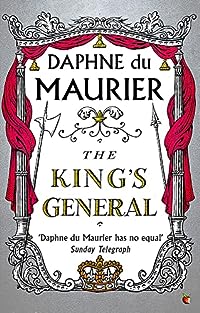 Daphne du Maurier is one of a list of authors whose books I’m slowly working my way through. Rebecca is still my favourite , it’s the one I judge everything else against. The King’s General is on my 2011 Reading List.

This novel is set in du Maurier’s beloved Cornwall during the English Civil War. Cornwall was a Royalist county and she used the house which she rented from the Rashleigh family for 30 years in this story. She seems to have looked into the history of the house and the family and woven a story around them.

The story is narrated by Honor Harris and at the beginning she’s a teenager and is a bit too feisty for a female in 1653. Much to the horror of her family she starts a relationship with Sir Richard Grenvile, an arrogant, self-centred Cavalier who is feared and hated by friend and foe. He’s the King’s General in the West. (Cornwall)

An accident(?) befalls Honor and she ends up having to live a very different life from the one which she had imagined. The same can be said for everyone else too as Parliamentary forces gain control of Cornwall. The action moves back and forth across the county and Honor has to move from house to house as the enemy lays waste to the land and homes. But it’s Menabilly, with its secrets, which becomes one of the main features of the book. A lot of the characters were real people and there is a wee section at the end which tells you what actually happened to them and then an interesting postscript about the house.

As always with the books which Daphne du Maurier sets in Cornwall you get a real sense of her love for the county. Personally, I was really chuffed when the village of Gunnislake got a mention as a battle was fought near there. We had a holiday there a few years back and I really wish that I had read this book before I visited Cornwall. Although I love history, the English Civil War isn’t one of my strongpoints, and I was completely clueless about what went on in Cornwall at that time.

That’s fair enough I suppose, as I’m Scottish, but I really want to read some more books about it. This one was a good introduction to the subject. It’s not as good as Rebecca, which I think people either love or hate, but it’s certainly worth reading.