This is just the second Fred Vargas book which I have read and although I enjoyed it, I didn’t like it as much as the first book I read of hers which was called The Three Evangelists.

The Chalk Circle Man was first published in France in 1996 but it wasn’t published in Britain till 2009 and it won The Crime Writers’ Association Duncan Lawrie International Dagger.

Mysterious blue chalk circles have begun to appear on the streets of Paris and Jean-Baptiste Adamsberg, the newly appointed Commissaire of the police headquarters in the 5th arondissement is taking it seriously.

Who is drawing them and why? Sometimes there are objects in the middle of the circles, normal street debris like corks and lost objects but it isn’t long before the whole thing takes a much more sinister turn.

I found this still to be well worth reading although it’s one of her earliest books. It is part of her Adamsberg series but I think I’m more drawn to her Three Evangelists series. Whatever, I’ll be reading more. 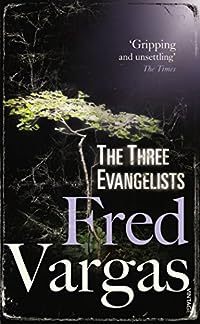 This is the first book by the French author Fred Vargas which I have read, in fact I had never even heard of her (yes Fred is female) until Joan Kyler mentioned she was reading a Vargas book. This one was first published in 2006.

Sophia Simeonidis is an opera singer, living in a good neighbourhood in Paris with her husband Pierre. The only blot on their landscape is the house next door which is uninhabited and has been left to go to wrack and ruin by its owner. The house is known locally as ‘the disgrace’.

Sophia is unnerved by a mysterious tree which has appeared overnight in her garden. Who planted it and why? Pierre is completely unperturbed by it but Sophia is worried that something has been buried underneath it and it weighs on her mind.

Marc, Mathias and Lucien, are all around about 35 years old and originally met each other at university. None of their ambitions has been realised and so they are fairly down at heel. When Marc walks past the shabby house which is situated next door to Sophia’s house he decides to try to rent it, it should be financially manageable with the help of his two old friends, and he would be able to move his uncle/godfather in too. Vandoosler, his uncle is an ex-policeman and he is the one who names the three younger men ‘the evangelists’. The younger men are quite eccentric characters, but also very likeable.

After the evangelists move in next door, Sophia asks them to dig under the tree, to put her mind at rest. Not long after that Sophia goes missing, but Pierre claims there is nothing mysterious about it and he isn’t worried at all, but Sophia’s friends are worried.

Although this is a fairly recent publication, for me it had the feel of an old fashioned mystery, and I mean that as a compliment. Modern crime fiction is often too gory and violent for my liking, so I’ll definitely be reading more by Vargas in the future.

Obviously this book was originally written in French and was translated by Sian Reynolds, who deserves praise for producing a very smooth and readable translation.

It was much cooler today on the east coast of Scotland than it has been for the past week or so, but still bright and sunny. We decided just to take a walk to the newly reopened library, it had been closed for 18 months or so for refurbishment.

I don’t really like anything about the new library set up. The lovely old built in bookcases have disappeared, replaced by low free-standing bookcases, and there are too many different sections which you have to check for authors. I prefer books just to be alphabetical, then you can see straight away if the author or particular book you are looking for is there. There’s just too much scope for books to be misplaced, so you have to look all over the place. Why on earth do they have a section for ‘family’ books? I’m sure there are far fewer books in the library than there used to be, due to the low shelving which is no doubt there for easy access to everyone. The library is now self-service, although I suppose you can wait to be served by a member of staff if you so wish. I suspect they want to cut back on employees eventually.

Anyway, I did take a few books out. I’m trying to work my way through the Agatha Raisin series, so I grabbed:

Agatha Raisin Hiss and Hers by M.C. Beaton
Agatha Raisin and the Potted Gardener by M.C. Beaton
Sunshine on Scotland Street by Alexander McCall Smith
The Three Evangelists by Fred Vargas – who I hadn’t even heard of until my friend Joan Kyler mentioned her. It’ll be interesting to try out this new to me author.

As you can see, I’m still in an easy/light reading phase and I’m a third of the way through Sunshine on Scotland Street already.