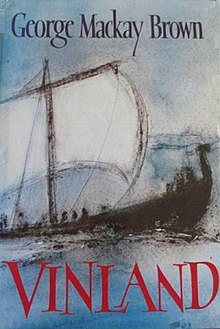 Vinland by George Mackay Brown  was first published in 1992 and I was attracted by its cover when I saw it in a St Andrews bookshop, the cover features a Viking ship  and the title seemed to promise something interesting as Vinland was the name that the Norwegian explorer

The time on Vinland passed very quickly as the First Nation people that they encountered were sensible enough to beat them off, it’s such a pity that the next tribesmen who encountered Europeans didn’t emulate them as then they wouldn’t be in the position they are today.

Anyway, back to the book. Vinland is written in the style of a Norse saga and it follows Ranald from his childhood through to his death at an old age. During his life on Orkney he realised that the violence and terror that had been the Viking way of life was no way to live and he settled down to cultivating the family farm. He never lost his longing for the sea though and dreamed of visiting Vinland again.

With Orkney being ruled by three brothers each with their own area and with the Kings of Norway and Scotland also laying claim to the place peace wasn’t always easy to come by.

I quite enjoyed this book but as I read the Orkneyinga Saga fairly recently and that is the actual Norse sagas about Orkney I wouldn’t have bothered to read this one if it had been titled Orkney as it should have been.

George Mackay Brown was an Orcadian writer, mainly a poet, and if you have visited the islands you might appreciate re-visiting them through the book as the geography of the place is so clearly described.

I’m counting George Mackay Brown as a Scottish author although he might not have been happy about that as the people in those northern islands sometimes take umbrage at that. Orkney was Danish until 1472.

The Golden Bird by George Mackay Brown consists of two novellas, the first one called The Golden Bird and the second one The Life and Death of John Voe. It won the James Tait Black Memorial Prize in 1987. The author is probably better known for his poetry.

I really enjoyed this book although possibly the fact that we were in Orkney in June and so I knew a lot of the places mentioned contributed to my enjoyment. I could picture exactly a certain spot mentioned in Stromness main street and many other locations.

The settings are Orkney in the 19th century, a time when the way of life there was beginning to change. It was a hard and dangerous life and when two of the men who had been fishing partners and shared a boat fell out over the division of their catch, it begins a feud that continues for generations.

The second novella The Life and Death of John Voe is about a man who had left the islands to seek adventures abroad. He hadn’t wanted to knuckle down on the family croft as a youngster, but after years on the sea and in South America and even some time as a gold panner, a failed romance prompts him to turn for his home in Orkney. It’s time to get back to crofting, but all is not as he expects it to be.

These tales are an enjoyable glimpse back to the past.