It’s ages since I did any serious knitting, in fact I’ve done very little in the way of crafting since we moved house almost three years ago. So I decided to get stuck into some knitting – a jumper for Jack, and if you think that the word jumper is weird and unknown to you, it’s also known as a sweater or jersey, presumably that word jersey is originally from the Channel Island of that name, just as Guernsey or gansy as they are sometimes known – is. 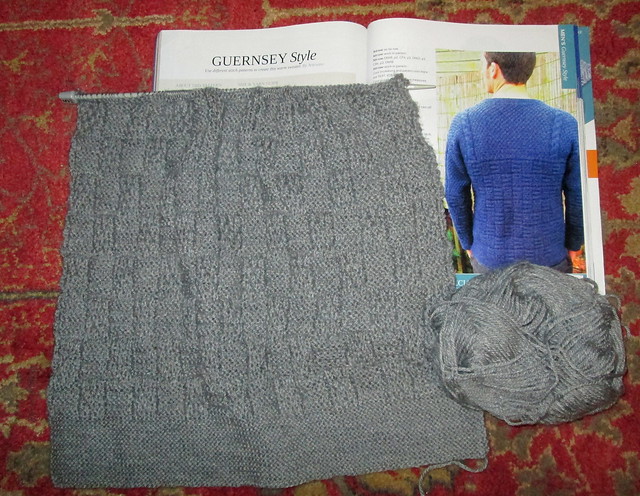 I think this knitting pattern is called Guernsey style because ‘real’ Guernseys are knitted using a circular needle, that’s something I’ve never used so I was happy to tackle this one which uses the two needle method.

Well, I say happy but to tell the truth I was a wee bit daunted by the pattern because it is set over twenty-four rows and I wasn’t at all sure that I would have the concentration to tackle that, but it turned out to be fairly easy to do. I’m quite pleased with it so far, but I’m not really looking forward to knitting the sleeves, keeping the pattern right at the same time as increasing the stitches might be a wee bit tricky!