I was really getting bookshop withdrawal symptoms as I hadn’t been to a second-hand bookshop for ages, so on Monday we drove to St Andrews, a place that we used to visit almost on a weekly basis but hadn’t been to for months – for no good reason at all. Anyway, it wasn’t long before I found some books that I just had to take home with me. 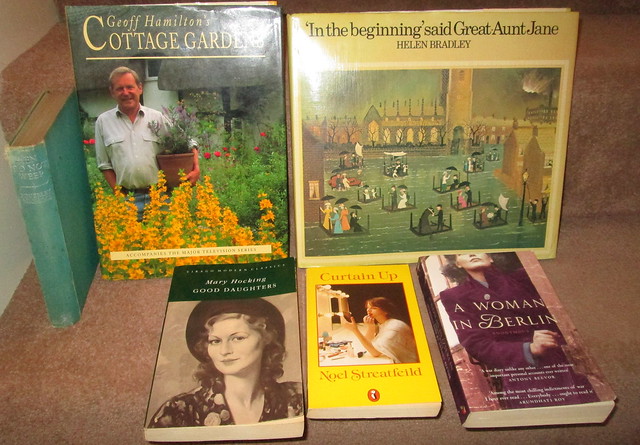 I found a Beverley Nichols book that I didn’t even realise existed.
Men Do Not Weep seems to be a book about World War 2 and was published in 1941, I think it’ll be an interesting read. You never know what you’ll get with Beverley Nichols though – his writing was so diverse, from cats to gardening and home hunting, novels and his thoughts on the USA.

Still on the subject of war is another book that I hadn’t heard of. It was the fact that I noticed Antony Beevor’s name on the cover that made me have a look at it as the author is anonymous. A Woman in Berlin is a diary which was written from 20th April 1945 to 22 June 1945. Not very long at all but a grim time in Berlin I’m sure. However on the back there’s a comment from the author Nina Bawden who says – ‘It could have been an unbearable story if it had not been for the courage and, astonishingly, the humour with which it is often told.’ It sounds like a must read to me. It was published by Virago.

Then I spotted a copy of a Geoff Hamilton book called Cottage Gardens, my favourite kind of garden and by my absolutely all time favourite garden writer and Gardeners’ World presenter, still lamented by me anyway 20 odd years after his far too early death.

On Tuesday we set off for Edinburgh, well we had seen the weather forecast and knew that we should grab every good day as it looks like the rain is coming in again on Thursday and Friday. After lunch at The Secret Herb Garden (more about that in a post still to come) we drove to Stockbridge, my favourite part of Edinburgh.

My first purchase was Curtain Up by Noel Streatfeild. I wasn’t sure about this one but the inside blurb says: ‘Plucked from their old home in Guernsey and sent all the way to wartime London to stay with their dead mother’s family ….’ This sounds right up my street – even if it was aimed at children.

The next was another Virago – Good Daughters by Mary Hocking. I haven’t read anything by the author but I know she’s fairly popular. This seems to be the first of a trilogy – the story of a family during the Second World War. Do you see a pattern forming here?! Apparently Mary Hocking brings good humour and sympathy to her depiction of the Fairley sisters growing up in their close-knit West London neighbourhood before, during and after the war.

Lastly I was really pleased to find a copy of ‘In the beginning’ said Great-Aunt Jane by Helen Bradley. I love her naive style of painting which she used to illustrate her own childhood memories for her grandchildren. 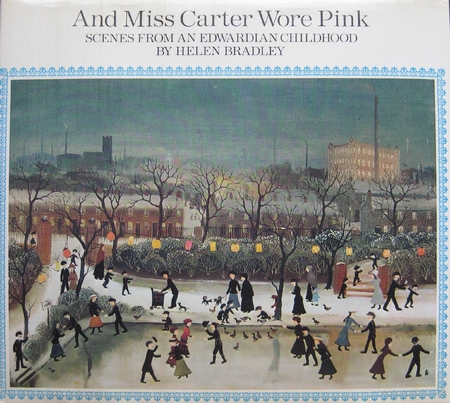 Have you heard of the artist Helen Bradley? She didn’t start painting until she was over 60. She wanted to show her granddaughter the memories that she had of her Edwardian childhood and the upshot was her book And Miss Carter Wore Pink. It was published in 1971 and I just bought a copy of it from a charity shop a few days ago. When I worked in libraries I was always having to rescue it from the nursery book boxes as people often thought that it was a book for kids and ‘helpfully’ relocated it.

In the book Helen Bradley tells the story of her childhood and the people who played a prominent part in it. It’s a really charming book although no doubt Helen Bradley was only painting her happy memories viewed through rose tinted specs. But maybe she did have an idyllic childhood. She said ‘The Edwardian period was lovely, gay and exciting, and I loved painting it, even the weather was kinder.’

Her style is primitive and deceptively simple looking. Her work has been compared with Grandma Moses and L.S. Lowry admired her work. In her 1970 art exhibition all of her paintings were sold before opening day.

You can see more images of her work here.