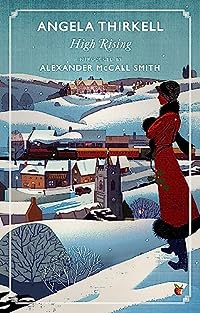 It’s the time of the year when if I’m not on holiday then I have people visiting me for a holiday, so I’ve just been too busy to blog recently, but a fun time was had by all as we dashed about the east of Scotland showing friends some sights. But back to blogging:

One of the books on my 20 Books of Summer 2017 list is Angela Thirkell’s High Rising, a re-read for me because I wanted to read them all in the correct order this time around. High Rising introduces many of the inhabitants of Barsetshire, that updated setting of many of Anthony Trollope’s books and featuring some of the descendants of his characters, but that is by the by as it really doesn’t matter if you haven’t read those books.

The book was first published in 1933 but my copy is a modern re-print with an introduction by Alexander McCall Smith. It mainly features Mrs Laura Morland, a widow with four sons, three of whom are out in the world, but her youngest son Tony is still at prep school and he’s the reason she keeps writing her very popular Madam Koska books, she needs the money they bring in to pay for his school fees apart from anything else. Tony is an exasperating little boy, absolutely full of himself and constantly boasting, but there’s a lot of comedy in Tony’s shenanigans. Thirkell had two sons of her own and I’m sure that she was using an actual boy as a template for Tony’s character, he’s obsessed by trains and has an urge to pass on all his railway information to anyone he comes across. Anyone with sons will recognise that stage, although in my day it was more likely to be dinosaurs or F1 racing.

George Knox is really just an adult version of Tony, someone who loves to hear his own voice, but he has taken on a secretary to help him write his books and there’s something odd about her. She seems to be far too familiar considering she is a type of servant, she is behaving more like a wife, and George’s friends fear she will hook him.

Can Laura save George from the clutches of the obviously mentally unstable secretary, whilst shedding her tortoiseshell hairpins? I googled kirby grips/Bobby pins to see when they were invented and it seems to have been in the 1920s, but Laura was sticking loyally to the old fashioned hairpins which do fall out easily, I know as I have some from way back then.

I enjoyed reading this one just as much as the first time I read it. If you want to read my more detailed review from then have a look here.