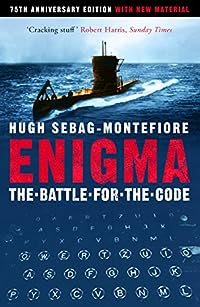 Enigma – The Battle for the Code by Hugh Sebag-Montefiore was first published in 2000, again it was Sandy McLendon who recommended I read it, and I’m glad that I did.

I didn’t know much about the subject other than what I learned by watching the similarly titled film so I learned a huge amount of details from this book.

I hadn’t realised that the effort to break the Enigma code went all the way back to 1931 when a German called Hans Thilo Schmidt had his first meeting with a French Secret Service agent. Although Schmidt had a job in the Cipher Office, the galloping inflation in Germany at the time meant that his pay barely covered his living expenses, never mind those of his wife and young family. He was interested in selling information to help his financial situation. His brother Rudolf Schmidt was high up in the German army and Hans got a lot of information from him too.

Meanwhile, the Poles were actively trying to break the German codes, a cryptology course had been set up in 1929 at the University of Posnan near Warsaw. The best of the students ended up being employed by the Cipher Bureau in Warsaw and they were the first to be able to crack some of the German codes. It was the beginning of a long allied struggle to be able to read Enigma and it seems amazing that they ever did manage to crack the codes. Although I had not realised that it was an ongoing struggle, as when the Germans changed the settings of their Enigma machines it meant that the coders at Bletchley Park had to start again to figure out the changes, meaning that the allies were again in the dark as to what was going on in Germany. In some ways that was a blessing as obviously the Allies didn’t want the Nazis to know that their messages were being read by them, and those “periods of silence” from Germany – the times where information couldn’t be retrieved from the codes – let the Nazis think that their codes were completely safe.

Everyone will have heard of Alan Turing now, but the Enigma story is so much more than one man and from a personal point of view I was very interested in all the details of U-Boats and the merchant ships which were involved in the Atlantic Convoys and were being torpedoed by the U-Boats. I needed my Dad beside me to talk to him about it as he was one of those Merchant Seamen being torpedoed there, but in common with most of the men who had terrible experiences – he never spoke about them, apart from saying it was an awful feeling leaning over the side of a ship and watching a torpedo coming through the water at you.

At the end of this book there are appendices giving lots of diagrams of the details of how the Enigma machines worked, about Cillis and Rodding and wheel positions and I must admit that I didn’t tax my brain with all that, but there is a section which gives the details of what happened to the main participants in the book and nicely ties up all the ends. A very interesting read.