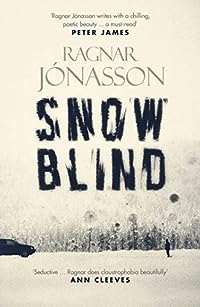 Snowblind by Ragnar Jonasson was translated from the Icelandic by Quentin Bates and published in the UK in 2015, it’s the first in a series.

Ari Thor is one of those people who quickly loses interest in things and rarely finishes anything. After giving up on studying theology in Reykjavik he switched to training to be a policeman. When a job comes up in Siglufjordur – a very remote fishing village in the north of Iceland Ari Thor applies for it. He hasn’t even talked it over with his partner Kristin who is a doctor in a Reykjavik hospital, they had been talking about marriage so his departure for the far frozen north is a shock to her.

As you would expect of such a remote area the townspeople are insular, it’s the sort of place where you’re always going to be thought of as an outsider and although Ari Thor’s boss seems to be friendly enough he isn’t happy when his new ‘boy’ proves to have a mind of his own and puts forward theories of his own. When the local celebrity who wrote a best selling novel decades ago is found dead at the bottom of stairs it’s assumed that it was an accident, but Ari Thor isn’t so sure.

I really enjoyed this one which has a good mixture of crime and personal life. Ari Thor finds it difficult to settle down in Siglufjordur where the winter is much colder than in Reykjavik and the snow triggers feelings of claustrophobia in Ari Thor – even before the avalanches cut the small village off from the rest of Iceland.

Snowblind reminded me very much of the Icelandic TV series Trapped, but that was written by Baltasar Kormakur – but I suppose anywhere in an Icelandic winter is going to have the same sort of atmosphere. I enjoyed Snowblind enough to make me want to continue with the rest of the books in this Dark Iceland series.

I read this one for 2019 European Reading Challenge which is hosted by Gilion at Rose City Reader.