This is the third book in my boxed set of Just William stories. I think this book is the best one so far, she really seems to have got into her stride with her William character, the stories just keep getting funnier. Well they tickle my funny bone anyway.

In this one William gets a free ticket to go for a trip on a charabanc and gets squashed in between two very fat fellow passengers, that’s an experience I’ve had, only it was a bus. He tells a woman that his parents neglect him because they’re both boozers and the woman confronts William’s parents.

He sells Ginger’s three and a half year old twin cousins as slaves for a shilling, is conned out of his clothes by a tramp and much much more, causing general mayhem in the entire neighbourhood, wherever he happens to be.

William even manages to sneak out to see a circus with his grandfather, who is being treated as if he is simple when he just wants to have a bit of fun back in his life. Mind you their choice of fun wouldn’t suit me because they’re both enamoured of the circus clowns. As far as I’m concerened clowns are the stuff of nightmares – as are circuses. I think I must have been the first child to put my foot down at the end of the 1960s and refuse to go on a school trip to the circus, quite possibly the only child ever to do that. Me, strange – never!!

Otherwise I’ve been reading Russian Winter by Daphne Kalotay which I was asked if I would like to review. Yes please said I as I’ve always been fascinated by Russia/USSR and I’ll be blogging about that one on February 15th.

I had to renew The Odd Women by George Gissing which I got from the library as I didn’t have time to finish it – or even start it for that matter.

What did I do today?

We went to The Royal Highland Centre at Ingliston near Edinburgh because there was an antiques fair there this weekend. It was absolutely heaving/hoaching with people, the busiest I’ve ever seen it and they were also filming Bargain Hunt so we had to do some camera dodging. Tim Wotsisface was wearing some fairly subdued clothes for once.

I was having a bit of a difficult time deciding which book to read a couple of weeks ago, nothing seemed to fit my mood. Then it dawned on me that I hadn’t read a ‘Just William’ book for ages. I galumph past my boxed set umpteen times every day as it’s in a bookcase half-way up the stairs – or on the mezzanine level if you’re an estate agent.

Anyway, it turned out that William was just what I needed to give me a guaranteed good laugh. Richmal Crompton (a woman) was born in Lancashire in 1890. The first story about William Brown appeared in 1919 in the Home magazine, 38 William books were written with the last one being published in 1970, after Richmal Crompton’s death. The Sunday Times said that the Just William series was “probably the funniest, toughest children’s books ever written.”

I don’t know what they meant by toughest but the books are a hoot and in this one William is 11 years old but he’s as anarchic as ever and gets up to all sorts of crazy high jinks much to the horror of his poor parents.

I think even modern day kids would love these stories although I’m quite glad that I didn’t give them to my own boys to read when they were wee. Life was chaotic enough without giving them more ideas!

It all reminds me so much of my own childhood with my older brother William who wasn’t much better than William Brown when it came to pea shooters, practical jokes and general mayhem. He always got off with it too! I’m not bitter, honestly!

I’ve been catching up with the new Just William adaptation on the iplayer. Although the programme is on Children’s BBC I think it probably has a large amount of middle-aged viewers. Set in the 1950s the whole thing has a very nostalgic attraction for people of a certain age, even without the entertaining and well acted stories.

The Brown family home has been so well kitted out. They even have the same antimacassars (chair back covers) still in the 1960s, but for some reason I really love the low tech 1950s kitchen. All of the characters have been well cast, including Jumble the dog.

Sadly Violet Elizabeth Bott doesn’t have red hair but otherwise I think she was very good and seemed to enjoy being covered in mud. At that time kids tended to be skinny due to rationing which continued well into the 1950s and the fact that they were allowed to run wild all over the place and use up their excess energy and burning off calories all the way. Unfortunately Daniel Roche who plays the part of William doesn’t quite fit the bill because his bones are quite well upholstered and he would definitely have had the nickname of Fatty or Podge or something similar and un-PC – in those days. But I can see why they wanted to have him playing William Brown after his success in Outnumbered. Douglas, another of The Outlaws, is even tubbier but I don’t suppose they could put them on a starvation diet just to make things look even more authentic.

They seem to have made just 4 episodes but I’m hopeful that they have more planned for the future. Martin Jarvis is the narrator, he seems to have cornered the market on Just William stories, amongst other things, but he does have a lovely voice.

Niranjana, I know that you won’t have much time to watch tv but I really hope that you’ll be able to see this new series of Just William on Canadian TV at some point in the future. 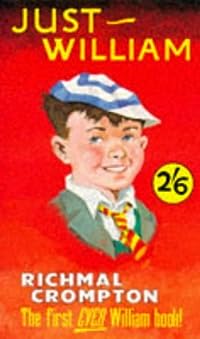 This book was perfect bed time reading when we got in from crazy jaunts across the country in the snow. William is a lovable character just 11 yers old and up to all sorts of naughtiness from a more innocent era. It was first published in 1922.

Chapter XI begins:
‘She’s – she’s a real Botticelli,’ said the young man dreamily, as he watched the figure of William’s sister, Ethel disappearing into the distance.
William glared at him.
‘Bottled cherry yourself,’ he said indignantly. ‘She can’t help having red hair, can she?

Thanks again to Niranjana (Brown Paper) for pointing me in the direction of Richmal Crompton.

If you slide your gaze over to my Library Thing thingmyjig on the right, you’ll see that I’ve started reading Ian Rankin’s Black and Blue. I thought I would probably go back to the beginning of the Rebus series but decided to start on this one as it’s in an omnibus edition of three which I’ve borrowed from the library. When I’ve finished with those ones I’ll start at the beginning.

What I’m really supposed to be doing at the moment is reading War and Peace and I can’t avoid it any longer so I’m planning to start that tomorrow, during the day time, I don’t think it’s bed time reading, somehow. 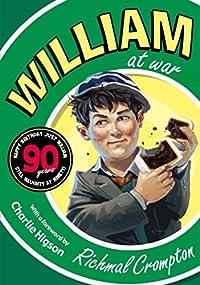 There were quite a lot of children’s books that I didn’t get around to reading until I had children of my own, I think I went on to reading books for adults at quite an early age. I caught up with a lot of them when I had kids of my own and read Peter Pan, Alice in Wonderland, the Narnia books and lots more as my boys were growing up, but still I avoided reading Richmal Crompton’s books.

So when Niranjana (Brown Paper) mentioned that she had the full collection of Just William books I began to think that maybe I had missed out on something good. Niranjana appreciates E.F.Benson’s Mapp and Lucia books – always a good sign I think!

So I’ve started off with William at War, which as Niranjana said, seems to have been cobbled together from Crompton’s other Just William books. I did enjoy all the scrapes that William Brown gets into, always with the best of intentions really. I read an Enid Blyton book earlier in the year just to see how I felt about her writing nowadays and I have to say that compared with the Malory Towers book which I read, Crompton’s writing is much better. I think the vocabulary is much wider, even although William does seem to be saying ‘jolly’ and ‘ole’ constantly.

But I can see why I avoided the books for so long. It was just too much like real life for me as a youngster but now it’s quite a nostalgia trip. As the youngest of five children my nearest sibling in age was my brother William who is five years older than me, and although he wasn’t born until the 1950s he was just exactly like William Brown as a wee boy. So he was a complete nightmare as a big brother. Especially as he didn’t seem to have a rival gang of ‘Outlaws’ to torment – so I took the brunt of it all.

This book brought it all back – catapults, peashooters, bows and arrows and all. My brother’s catapult was a heavy metal thing with industrial strength rubber and he could quite easily have killed somebody (me) with it.

I’m pretty sure that my brother William didn’t read these books but he did balance a bucket of water on top of my half-open bedroom door once and of course when I pushed the door open I was drenched with cold water and hit by the bucket. William Brown planned to do this in the book too. But all such nonsense didn’t stop my brother William from being very much my mother’s favourite.

Spookily I resembled the characeter Violet Elizabeth Bott as a child with my red hair and even a lisp, and annoyingly I still have a lisp, which I hate but I’m quite happy with the red hair.

Now it’s just a laugh and my brother and I get on really well together so I can look back with pleasure. I’ve got another ten Just William books to read through now.