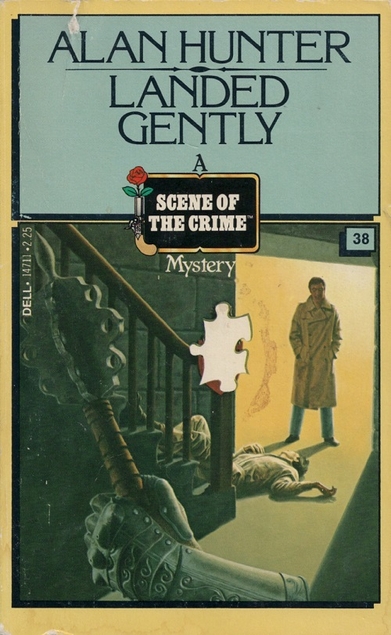 Landed Gently by Alan Hunter was first published in 1957, it’s the first book that I’ve read by the author, but it won’t be the last. It’s a really old fashioned big house murder mystery, complete with floor plan of the house. Like many books with that setting it features a railway journey early on and for me that all contributes to the atmosphere. I love those old railway carriages and I could see it clearly in my mind.

It begins with Chief Inspector George Gently of the C.I.D. preparing to travel to Northshire where he has been invited to spend Christmas. Settling down in his first class train carriage suddenly he has to get up to help a young man into the carriage, Lieutenant Earle is in the US airforce and he’s spending Christmas at Merely Park, another large house close to where Gently is going.

So far so traditional – but although it was fairly obvious to me what was going to happen from very early on, that didn’t detract from my enjoyment and with twists and turns it reached a satisfactory conclusion and I didn’t guess the perpetrator.

I’ve seen Alan Hunter’s books about for years but I’ve never bought any before as I knew that there was a TV series featuring George Gently, and I’ve never wanted to watch it, mainly because I’m not keen on the actor that plays George Gently. It turned out though that the TV series is really nothing like the books at all, they just borrowed the character it seems.

Our friend Eric Brown the writer of the Langham and Dupre crime mysteries gave me this book to read.