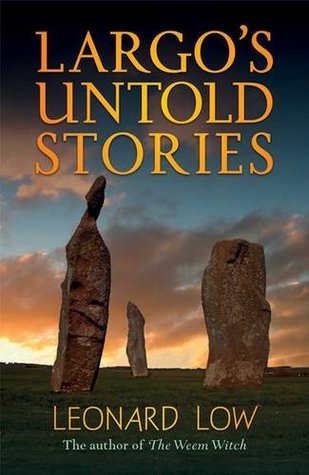 Largo’s Untold Stories by Leonard Low is an interesting read. The author doesn’t stick rigidly to writing about the little coastal village of Largo in east Fife. I was very interested to read that there had been a big battle between the Romans and the Pictish tribes at the base of the Lomond Hills in Fife not far from where I live. If you live in the area or you intend to visit the ‘East Neuk’ it would be a good idea to read a book like this first.

Mind you given that some of the history features ‘witch’ burning and torturing I must admit that walking along Largo beach won’t ever be quite the same for me as it was the scene of some horrific acts carried out by jealous and crazed villagers.

He also writes about the real Robinson Crusoe (Alexander Selkirk) who came from Largo and about starvation and cannibalism on an expedition in search of the North West Passage which had links to the area.

Lots of stone cist burials have been found locally dating from the 420s AD and some earlier. The first one found was a woman who had been buried in a sitting position. Over the years jewellery has been found when major works have been taking place, such as the building of the railway line when two gold torques were discovered. The Pictish tribes buried their valuables before going to war.

If you are interested in seeing what the area looks like have a look at some images here.

I was loaned a copy of The Weem Witch by Leonard Low by a friend after hearing the author talk at a local history group meeting on a different subject. This is an interesting although at times horrific read because in the early 1700s in the coastal villages of Fife a terrible kind of madness took over the inhabitants. The area had suffered badly from an economic downturn and was extremely poverty stricken. Life was miserable for most people there and it didn’t take much for people to point fingers and accuse people of being a witch. In 1704 A bucket which contained some water and coal and left outside a door was claimed to be a witch’s spell. The local bigwigs and particularly a local church minister started to cast around looking for someone to blame for their misfortunes and dragged lots of innocent women and some men into their investigations. Their victims were tortured until they would admit to anything just to make it stop.

The goings-on were objected to by the authorities in Edinburgh who obviously had a bit more common sense about them and that led to so-called witches being released, but the locals must have felt hard done by and when a young woman – Janet Cornfoot – who scraped her living by doing sewing for people was accused of being a witch by one of her drunken clients, they were determined to give her a ghastly end.

This was an interesting read, although as the author himself admitted he does ramble at times and he throws in quite a bit of earlier history to set the scene, which was fine by me, but the people of Pittenweem (which is a village very close to where the author lives) seem to have been a very nasty lot who whipped themselves up to hysterical madness and committed long drawn out murder on the beaches of the East Neuk of Fife. I’ll never feel quite the same about having a walk along those beaches!