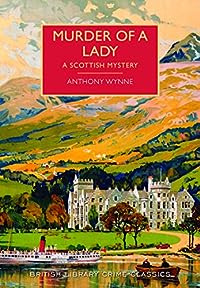 This vintage crime book was first published in 1944 and it’s another ‘locked room’ mystery.

The successful thriller writer and playwright Dick Markham has just become engaged to Lesley Grant, a new inhabitant to the village, much to the disgust of many of the villagers who had expected him to marry their favourite, the local girl, Cynthia Drew, whom he’d been friendly with for some time.

The action begins at a village bazaar with the usual entertainments like a shooting-range, cricket match and fortune-teller’s tent. When Lesley shoots the fortune teller in an accident it isn’t long before rumours start to circulate that she isn’t who she claims to be and Dick doesn’t know what to believe.

The detective Dr Gideon Fell arrives to investigate the dastardly goings on in the village and things become even more perplexing before he manages to crack the case. I was kept guessing right to the end, what more can you ask for!

This book is part of the Black Dagger Crime series which is a joint effort between BBC audiobooks and the Crime Writers’ Association.

If you want to learn more about Dr Fell have a look here.

He reminds me a bit of Rex Stout, they both have a huge girth, find it difficult to get about and have more than a fondness for beer but I can’t help wondering why Dickson Carr gave him the name of Dr Fell. It’s a name which was first used in 1680 when it appears in a nursery rhyme, you can read about it here. But that article doesn’t even mention the Dickson Carr use of the name, although several other people seem to have used it.