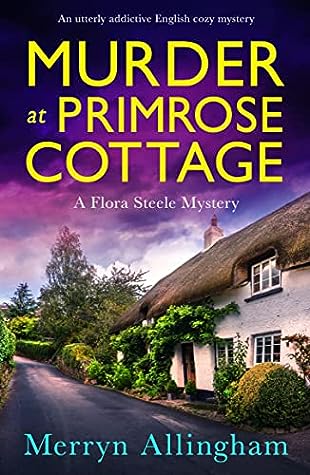 Murder at Primrose Cottage by Merryn Allingham is the third book in her Flora Steele series, but it’s the first one that I’ve read, I would probably have enjoyed it more if I had read the first two. The setting is Sussex and then Cornwall, apparently in the 1950s but to be honest there isn’t much in the way of 1950s ambience.

Flora Steele owns a bookshop in Sussex, but when her friend Jack has to go to Cornwall to research a book that he’s writing she decides to accompany him. Jack writes murder mysteries and when he receives a threatening letter just before they set off for Cornwall, he thinks it might be better if Flora stays at home, but she’s determined to go with him.

The morning after they reach their rented cottage (with separate bedrooms) Flora discovers their landlord’s body in the orchard. The locals are quick to point the finger at Mercy Dearlove, the local witch or ‘peller’, and the police don’t seem at all interested in solving the crime, so Flora and Jack oblige and do it for them, and that obviously throws them into the path of danger.

I think the Cornish setting was quite realistic, there seemed to be quite a lot of rain and I remember that from the one time we travelled to that far end of England, as usual everyone said we should have been there the previous week!

I am of course a bit of a nit-picker when it comes to details in books, so I was annoyed that the author seems to think that grammar schools have fees – they don’t and never have had, you get in by academic merit. I was also puzzled by the use of torch and a flashlight in the same sentence as if they are two different things, when they are the same thing with flashlight obviously being the US word for what we call an electric torch, although nowadays the ‘electric’ bit is dropped. But this is quite an enjoyable read anyway and I would read the next one in the series I think.

My thanks to the publisher Bookouture who sent me a digital copy via NetGalley for review.