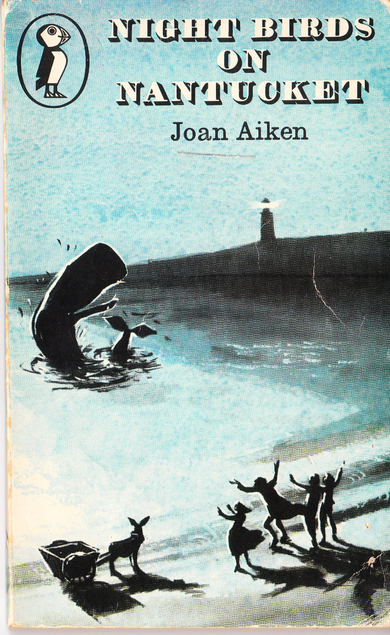 I’m making my way through this Joan Aiken series featuring Dido Twite. This was the first of the series that I picked up at a secondhand bookshop, an original Puffin book which cost all of 25p when it was published in 1966, but as it comes third in the series I had to find and read the first two before getting around to this one.

I was attracted to the book because of the back cover blurb:

Here is a new adventure for Dido Twite (the enchanting heroine of Black Hearts in Battersea), waking from a long sleep to foil Miss Slighcarp, the wicked governess, in her plan to assassinate King James III by long-distance gun – and her greatest ally is a pink whale called Rosie.

Who could resist that craziness?!

Dido has been rescued from the sea by a whaling ship and slept for ten months, being fed on whale oil and molasses while she slept. When she wakes up the sailors have just caught a whale and are dealing with it (not a pleasant description) and Dido is sorry to hear that they can’t take her back to England immediately, they’re going in the opposite direction. The ship’s captain has a daughter on the ship, Dutiful Penitence is about the same age as Dido but is pining away after the death of her mother on board. Dido succeeds in making Pen take an interest in life again and together they get mixed up in another Hanoverian plot to kill King James III.

The long distance gun is so powerful it will blow Nantucket back as far as Atlantic City – a horrific thought apparently!

It’s a daft but fun read.