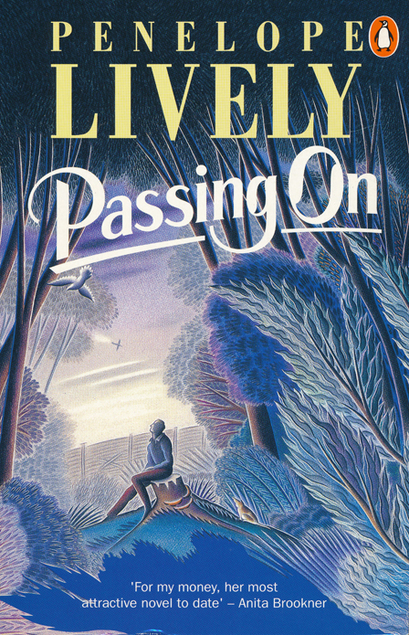 Passing On by Penelope Lively was first published in 1989. Her previous book Moon Tiger won the Booker Prize in 1987, but I think that Passing On is even better than that one.

The book begins with the funeral of Dorothy Glover. It isn’t a massive funeral as she had been disliked by everyone she came into contact with, for good reason as she’s a nasty piece of work. Dorothy was a manipulator and a domineering bully who obviously got a lot of enjoyment out of making other people’s lives miserable. Her oldest children Helen and Edward are in their late forties and early fifties and they’ve never been able to get free of her grasp on them. This has had a terrible effect on their lives, particularly Edward’s. Louise, the youngest of the family is married with two children and she managed to get away from her mother because she has her mother’s determination and bad temper.

Their father is long-dead but he had been a mild-mannered man and Helen and Edward must take after him. It’s a mystery to the ‘children’ how their parents got together in the first place. With Edward and Helen’s lives more or less being on hold until their mother’s death they both need to widen their horizons, and hope to enjoy new experiences. But will it be possible?

All through the book everything that Helen does is accompanied by a running commentary by her mother in her head. It seems as if Dorothy is still getting at her from the grave, which indeed she is because the will is not what they all expect it to be.

I’ve read quite a few of Penelope Lively’s books now and they just keep getting better.